A 'Crash Landing': The Slow and Painful Death of India's Air Force 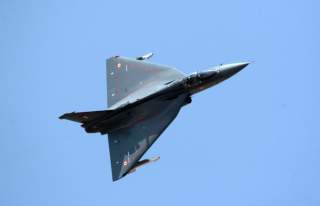 The Obama Administration is gearing up to sell eight new Lockheed Martin F-16 Fighting Falcon jets to Pakistan, the New York Times reports. Those jets will add to Pakistan’s fleet of seventy-six existing “Vipers” as the type is colloquially known. Meanwhile, its arch-nemesis India’s air force shrinks by the day as planes age out and squadron are disbanded.

Assuming Pakistan completes the sale, the eight F-16s would help boost that country’s fleet of eighteen existing advanced Block 52+ Vipers. The rest of the Pakistani F-16 fleet consists of modified A-model jets that have been upgraded to Block 15 MLU standard, which bring those aircraft nearly up to the same capability as the newest Block 52+ jets.

Pakistan is also buying more than 150 Pakistan Aeronautical Complex/Chengdu JF-17 Thunder fighters. According to Flight International’s World Air Forces Directory 2015—Pakistan currently has forty-nine of the aircraft in service with 100 more on order. The JF-17 ultimately originates as an extensive redesign of the Chendu F7, which was originally a license-built MiG-21 derivative. Powered by a Russian-made Klimov RD-93—which is a version of the MiG-29’s engine—the JF-17 provides decent capability at low prices. It is likely that the JF-17 will replace Pakistan’s geriatric fleet of Chengdu F-7s, Mirage IIIs and Mirage Vs.

The rest of Pakistan’s fleet is composed of 140 Chinese-made F-7P and F-7PG fighters, which are a Chinese copy of the Mikoyan MiG-21. The aircraft have been upgraded with Italian-built Grifo-Mk-II radars, but are now obsolete. There are also roughly 157 French-built Dassault Mirage IIIs and Mirage Vs in service with the Pakistani air force. But while the F-7 will eventually be replaced by the JF-17, it’s not clear what Pakistan’s intentions are to replace the Mirage fighters.

The bottom line for Pakistan is that while its air force can’t compete with the Indian air force in terms of numbers, it is upgrading its forces and potentially even growing. Meanwhile, India’s air force is shrinking.

The overall balance of power in South Asia rests with India—but that nation is increasingly being challenged by an ever more powerful China, even if Pakistan is not quite the threat it once was. But the Indian military—particularly its air force is suffering due to that nation’s dysfunctional government, incompetent bureaucracy and intransigent negotiating tactics.

The Indian air force is required to muster a strength of forty-two combat aircraft squadrons, however, due to decades of negligence it can barely manage to operate thirty-five units. That number could further shrink and hit a low of twenty-five squadrons if nothing is done to staunch the bleeding.

Part of the problem is a lack of trained pilots, but mostly it’s India’s inability to select a new fighter and complete negotiations in a timely manner—or really at all. The prime example of Indian bureaucratic incompetence is the Medium Multi-Role Combat Aircraft (MMRCA) competition, which started with an Indian air force requirement for 126 fighters in 2001. While the Dassault Rafale eventually “won” the competition in 2011—nearly ten years later—India managed to derail the negotiations with various unreasonable demands that neither the French government or Dassault would ever agree to. Ultimately, the MMRCA program was cancelled earlier this year.

India is currently negotiating to buy thirty-six Rafales directly from the French government; a deal is allegedly imminent by the end of the year. But given India’s track record—that’s dubious at best. But the Indian air force still needs at least 120 medium combat aircraft with similar capability to the Rafale. Indeed, the Indians still hope to buy more Rafales, but they might have to extend production of the indigenous Tejas to keep their fleet numbers up.

But the problem with India’s HAL Tejas is that it is one of the single worst fighter projects that has ever been conceived of in the history of aviation. Even as it enters service, the aircraft is obsolete and is probably inferior in many respects to the JF-17. The jet has 57 known deficiencies and will probably get a lot of Indian pilots killed if any type of conflict were ever to break out.

Meanwhile, the one bright spot for the Indian air force is the Sukhoi Su-30MKI. While the Indians have had some issues with the Russians in supporting the Flanker-H, the 220 Su-30s that are currently in service are that country’s first line of defense. India will ultimately buy 272 Flanker-H fighters, but it should give serious consideration to extending that buy until its air force recovers some of its numerical strength. Basically, India should consider scrapping the Tejas and buying 120 or more additional Flankers.

In the future, the Indians are likely to buy a derivative of Russia’s T-50 PAK-FA stealth fighter. But the Indian-Russian co-development effort is a rocky one—and it is unclear how many jets will ultimately be delivered to the Indian air force and when. India is also developing it’s own fifth-generation fighter—but given it’s previous efforts on the Tejas, it’s not likely to fly any time soon.