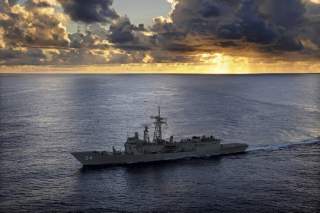 This week the Pentagon ordered the USS William P. Lawrence, a guided-missile destroyer, to sail within 12 nautical miles of the land feature China has constructed on Fiery Cross Reef in the South China Sea. It’s the third time since October the US Navy has penetrated the zone, and it reaffirms Washington’s insistence that Beijing has no territorial claims to the artificial islands there.

It’s one thing for a global hegemon to keep in check a rising China. But should Australia accede to US requests to participate in freedom of navigation patrols? After all, we’re a middle power with a rapidly developing trade and commercial relationship with China and no territorial claims in the region.

Opinion varies. And it is Labor (of all parties) that’s found itself on the more assertive side of the debate.

According to Labor’s defense spokesman Stephen Conroy, Canberra should sail follow-up patrols through the 12-nautical mile zone to help deter China’s "belligerent behavior." It’s a position strongly backed by Labor grandees Kim Beazley and Gareth Evans. Conroy has also attacked the Turnbull government for prevaricating and refusing ‘to provide a proper account of what our military assets are doing in the South China Sea’. Meanwhile, John Howard has lent support to a more cautious response. In an address to the Griffith Asia Institute on April 20, the former Liberal prime minister warned that while we should reaffirm principles of international law, ‘we should guard against overreaction’.

In an interview with The Wall Street Journal just last week, he remarked: "What is the alternative? To try [to] bring it to a head? No, I don’t think that is very smart… I just think we have to be patient. Don’t retreat, but be patient." Judging by the Coalition’s reluctance to sail navy ships through the zone, the Turnbull government agrees.

The problems posed by a rising China are real and extremely difficult ones, and there’s much to be said on both sides of the matter.

International law aside, the rules for this burgeoning security competition have yet to be drawn and thus we find ourselves in a fluid situation. The Chinese fully understand this, which perhaps explains why they’ve been using salami-slicing tactics to alter the status quo to their advantage. Certainly they respect strength and will exploit weakness.

So by this reasoning, Washington ought to draw lines in the sand (water!) and create as favorable a strategic environment in East Asia as is possible. The sooner US allies do this the better, the argument goes, because the balance of power will shift against the US coalition over time. If we wait, we are told, the US and its allies would just have to do this in two or three years and we would be in a worse position then.

That’s a good example of what the distinguished Chicago University political scientist John Mearsheimer has called the tragedy of great power politics: damned if you do; damned if you don’t. But given those two alternatives, it’s better to act now than later.

All this, though, is premised on a belief that China is bent on dominating Asia and pushing the US out of the region. As US Pacific Commander Admiral Harry Harris told a US congressional committee in February: "I believe China seeks hegemony in East Asia. Simple as that."

Growing Chinese strength also worries China’s neighbors, most notably Vietnam and the Philippines, causing the former foe and colony to strengthen their security ties with the US. This worries Beijing, which may try to break out of the perceived encirclement. Washington may respond with greater efforts, and not just regular freedom-of-navigation patrols. Cycles like this can lead to wars.

Which is why Howard’s case for caution is sound, especially given Beijing’s many internal challenges: environmental, demographic and not least economic. Besides, as the former prime minister points out, China is "exhibiting all of the tendencies of a new great power who has fairly recently arrived on the scene." As its power rises, its definition of national interests grows and it starts to assert a sphere of influence in areas where its prosperity and stability depend. There’s nothing wrong with this behavior—it’s the way the world works, and always has.

In these circumstances, statecraft demands cutting Beijing some slack while insisting it’s in China’s interest not to become involved in a major conflict with the US. If the Chinese met our conciliation with intransigence, the US-led coalition could be free to respond with tougher measures, including more regular freedom-of-navigation operations.

For Australia, the key is to balance China’s right to an enhanced regional profile with our own interests and commitments. Upholding the rules and customs of the open seas is an important priority. So, too, is not overreacting to some modest muscle flexing on China’s part.

One suspects Malcolm Turnbull, an astute student of Chinese history and power politics, recognizes this priority. Which explains his evident caution in pushing Australian participation in freedom of navigation exercises in China’s immediate neighborhood.