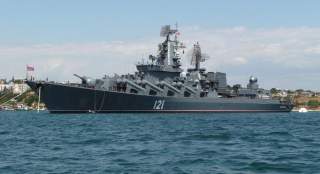 The Kalibr NK has a range of about 1,500 miles, cruises about 150ft off the surface of the Earth and can hit a target within nine feet of its aim-point with its roughly 1000lbs warhead. The weapon is also purported to have a supersonic terminal phase. The missile is supposedly able to hit speeds of Mach 2.9—but concrete data is hard to come by and it is not certain every variant has that capability. The anti-ship version—called the SS-N-27 Sizzler by NATO—is particularly worrisome because it can pop-up from its usual sea-skimming flight path to drive nearly vertically onto a target, which makes it difficult to intercept.

The Kalibr NK affords even the relatively tiny Buyan-M-class corvettes the kind of long-range land attack punch usually only found on much larger warships. In fact, the Buyan-M’s eight Kalibr missiles give it a heavier long-range punch than the U.S. Navy’s now-retired Oliver Hazard Perry-class frigate and certainly much more firepower than either version of the service’s Littoral Combat Ships (LCS)—the surface warfare module for which is currently lacking anti-ship missile or any meaningful land-attack capability (it was designed to hunt small boats). A follow-on frigate version of the LCS will have more long-range firepower—but it’s not clear what its armament will look like.

In fact, the only operational U.S. Navy surface combatants that pack that kind of firepower are the Arleigh Burke-class destroyers and Ticonderoga-class missile cruisers—which are, of course, much larger and many times more expensive. Those ships carry the Tomahawk land attack cruise missile but only some of them are equipped with the shorter-range Harpoon anti-ship missile. But even with that armament, in recent years, it has become clear that the U.S. Navy has underinvested in anti-ship missiles. The result is that American warships are dangerously “out-sticked” by Russian and Chinese vessels. The U.S. Navy expects to address the problem with the Offensive Anti-Surface Warfare (OASuW)/Increment 2 anti-ship missile while the Tomahawk will also eventually be replaced with a next-generation cruise missile.

Why the Russians chose to use the Caspian Sea flotilla to launch the attack is unclear. Another mystery is why the lake-based fleet packs so much long-range land attack firepower—who were the Russians expecting to fight? Many will point out that the Project 1164 Atlant Slava-class missile cruiser Moskva is sitting off the Syrian coast along with a number of other vessels. Superficially, Moskva is a more logical choice for attacking Syrian-based targets. But the while the massive 11,000-ton cruiser possesses formidable anti-ship and anti-aircraft capabilities with its sixteen P-500 Bazalt long-range anti-ship missiles and battery of sixty-four S-300 surface-to-air missiles, it does not have much in the way of land-attack capability. The Soviets designed the Slava-class cruisers to attack American aircraft carrier battle groups out in the open ocean rather than to strike land targets (However, the other vessels in Moskva’s task force might be equipped with land-attack cruise missiles). So the Caspian Sea flotilla might have been the closest assets with the right weapons for the job at hand.

While Russia might or might not have had valid military reasons for using the Caspian Sea flotilla against its enemies in Syria, there is an added benefit for Moscow. The cruise missile attack showcases the formidable capabilities of the Kalibr NK—shorter-range versions of which are available for export. Russia also demonstrated that one does not need to own a missile cruiser or destroyer to own a very formidable warship. As this raid amply demonstrated, the Buyan-M offers excellent capability at low cost. The ship is available for export—which buyers who need potent naval capabilities but don’t have a large budget are certain to notice.