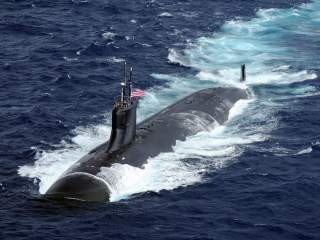 The United States Navy needs more submarines, intelligence surveillance and reconnaissance (ISR) capacity, as well as more anti-ship missile capability in the Pacific to counter rising Chinese militarization of the South China Sea. Submarines, especially, are the best way to counter the People’s Liberation Army Navy—but the problem is that the United States does not have enough Virginia- or Seawolf-class attack submarines.

“I don’t have the submarines that I feel I need,” Adm. Harry Harris Jr., commander of the United States Pacific Command (PACOM) told the House Armed Services Committee on February 24. “But that’s a function of the total number of submarines that the United States Navy has and the global demand for that platform.” The U.S. Navy currently operates about 40 subs, but only around fifteen are the most modern Virginia- or Seawolf-class designs.

If given a choice between permanently deploying an additional aircraft carrier and its air wing or more submarines to the Pacific, Harris said that the best way to counter Chinese naval forces would be more submarines. “Submarines are the original stealth platform—they clearly give us an asymmetric advantage,” Harris said. “Our asymmetry in terms of warfare because of submarines is significant. In the modernizing sense, we need to maintain that asymmetric advantage.”

While Harris said that as a combatant commander he would never turn down an additional aircraft carrier strike group, there are fiscal, political and technical hurdles to basing another flattop in the Western Pacific. However, in lieu of another carrier, the United States could consider basing additional nuclear-powered attack submarines and major surface combatants in the Pacific. “We could put in maybe the new destroyer—the DDG-1000s—and move them forward,” Harris said. “There are a lot of things we can do short of putting a full carrier strike group in the Western Pacific.”

Major surface combatants like the DDG-51 Arleigh Burke-class are best types of vessels to conduct the U.S. Navy’s operations in the South China Sea. The heavily armed warships can conduct the type of freedom of navigation operations close to China’s newly constructed islands without being forced to retreat if challenged. The ships are, Harris explained, “highly capable, the right kind of weapons and the right kind of systems to ensure the freedom of navigation operations are conducted well and the ship is well able to defend itself should those operations go awry.”

Harris also noted that he needs more persistent ISR and cyber warfare capability in the region. Additionally, the U.S. Navy needs a new long-range anti-ship missile as soon as possible. Adding anti-surface mode to the long-range SM-6 surface-to-air missile helps greatly, but the Navy still needs dedicated long-range anti-ship systems. “I spoken about the need for a long-range anti-surface missile that can out-stick—if you will—Chinese missile systems in the Pacific,” Harris said. “I’m pleased in the FY17 budget there is funds put against development of LRASM—the Long Range Anti-Surface Missile.”

The combination of those additional resources should be enough to deter China in the Western Pacific, Harris said.