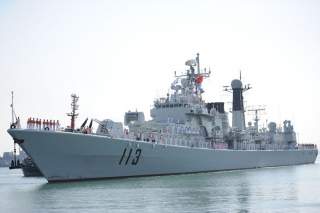 Not content with transforming reefs into air strips, China is now building massive new floating islands that are likely to be used by the military in the South China Sea.

Over at their “Eastern Arsenal” blog on Popular Science, Jeffrey Lin and P.W. Singer report on a press conference this month announcing the new floating islands. They note that the islands will be built by two Chinese companies— Jidong Development Group (JDG) and Hainan Hai Industrial Company—and the first of them will be used for offshore oil and gas exploration at the South China Sea.

However, Lin and Singer also report that a People’s Liberation Army officer spoke at the press conference, and that the floating islands have many military uses.

“The floating island can support both civilian and military missions, including supply, landing aircraft and basing of amphibious vehicles,” the two authors write in their report.

The authors estimate that the three proposed floating islands would displace anywhere from 400,000 and 1.5 million tons In addition, they would be able to travel at speeds of sixteen kilometers per hour.

As the authors put it: “The design though would allow the islands to scale much larger, by attaching more semi-submersible hull modules, just like Lego bricks. Despite the large size of the individual modules, the floating islands could be easily assembled in deep offshore waters by linking together modules transported by semi-submersible heavy lift ships from landbased shipyards.” The modular design would also make the floating islands difficult to sink.

Another computer generated image depicts a floating island that stretches an incredible two kilometers. “Such giant bases could house battalions of marines and a wing of fighter/attack aircraft, and unlike fixed island bases, they can be redeployed away from enemy missiles,” the authors write in the report.

As The National Interest has repeatedly noted, China’s military is currently shoring up its ability to project force in the South China Sea, likely as a prelude to establishing an Air Defense Identification Zone (ADIZ) in the disputed waters. As part of this effort, Beijing has been transforming reefs in the region into artificial islands through massive land reclamation projects. Last week, new satellite images analyzed by IHS Jane’s found that China is constructing its first air strip in the Spratly Islands where Beijing has transformed Fiery Cross Reef.

Zachary Keck is managing editor of The National Interest. You can be found on Twitter: @ZacharyKeck.