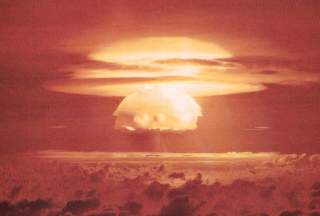 In October 2006, North Korea (DPRK) exploded an underground nuclear device, simultaneously becoming the world’s ninth nuclear weapons state and most volatile threat in the Asia-Pacific. The day of the test, the New York Times characterized North Korea as “arguably the most unstable and most dangerous” nuclear power, yet expressed doubt about Pyongyang’s ability to “fabricate that bomb into a weapon that could fit atop its missiles.” At the time, the primary fear was North Korea’s perceived willingness to disseminate nuclear know-how to other potential proliferators.

A decade later, North Korea has conducted four additional weapons tests (in 2009, 2013, and two in 2016), each demonstrating an increasing proficiency with nuclear technology. After last month’s test, it is clear that North Korea is rapidly acquiring a nuclear arsenal capable of striking American allies in Asia and will soon be able to reach the U.S. homeland. While North Korea made strides in nuclear and ballistic missile technology, Washington adopted a policy of “strategic patience” tantamount to inaction. Unfortunately, time has run out on hoping North Korea will decide to abandon its nuclear ambitions. The next administration will need to craft a proactive strategy for halting and hopefully reversing the growth of Pyongyang’s nuclear force.

Some analysts have begun to question whether a preemptive war is the best response to the growing DPRK threat. Proponents argue an air war targeting the country’s major nuclear facilities could effectively neutralize it. This call echoes an earlier one from Defense Secretary Ashton Carter who, in 2006, advocated with former Defense Secretary William Perry for a surgical strike on the DPRK to destroy the “carefully engineered test bed for North Korea’s nascent nuclear missile force.” They correctly warned that a failure to respond would only result in “more nuclear warheads atop more and more missiles.” While some still see the military option as the only surefire solution to the nuclear threat, it is no longer a viable option.

When Secretaries Carter and Perry first recommended their course of action, the North Korean nuclear program was still in an embryonic stage. A punitive strike on a missile would have sent a limited, but firm message to the Kim regime. By contrast, to be effective today, the U.S. would need to conduct strikes against all North Korean nuclear weapons and facilities. Counterforce strategies such as this have always been viewed as risky endeavors: if just one weapon were to survive a second-strike nuclear capability would be preserved, and could be used against American and allied forces.

Even if the United States could neutralize North Korea’s nuclear weapons and facilities, the amount of damage its conventional military would be able to inflict on South Korea would be enormous. Harry Kazianis paints a grim picture of the destructive force North Korea might bring to bear on U.S. and South Korean forces in the event of a war. Artillery strikes and chemical weapons alone could cause massive casualties and billions of dollars in damage. This all but assures a military solution to the North Korean question is the worst possible choice.

If force is not an option, Washington should instead consider pursuing a coordinated diplomatic initiative, aimed at limiting or reversing North Korea’s nuclear program. Secretary Kerry has already recommended the United States promote the Joint Comprehensive Plan of Action with Iran (JCPOA) as a model for a future arrangement with North Korea. Such a deal would fall within the same “transactional” category as the JCPOA; the United States should not offer any normalization of relations with North Korea, but instead focus on dealing specifically with their nuclear weapons.

Officials from both governments have hitherto set unmeetable preconditions for negotiations: Washington is unwilling to recognize North Korea as a nuclear power, which Pyongyang demands. To break this impasse, the U.S. will need to conduct some stage setting measures to bring North Korea to the table. These should include strict and aggressive implementation of UNSC sanctions, the expansion of anti-ballistic missile (ABM) defense systems in South Korea and Japan, and a guarantee to Pyongyang that any nuclear attack on the U.S. or its allies will be met with catastrophic retaliation. More important than any of this, Washington will need to entice Beijing to pressure the Kim regime to compromise.

China has typically been reluctant to place undue pressure on North Korea, despite its outspoken opposition to the DPRK’s nuclear program. This is largely because of Beijing’s fear that it could result in a sudden and unexpected regime collapse, triggering a massive refugee crisis and possible confrontation with Washington and Seoul over the future of the Korean peninsula. The U.S. does have an opportunity, however, to use the nuclear question to induce China to cooperate. Earlier this year, the U.S. agreed to deploy the Terminal High Altitude Area Defense (THAAD) in South Korea as a North Korean countermeasure. The summer announcement caused an incident between the U.S., South Korea, and China, which perceived the deployment as an implicit threat to its own strategic deterrent. Washington could offer Beijing a choice: persuade Pyongyang to negotiate in exchange for the removal of THAAD, or deal with even more ABM systems in the Asia-Pacific. This should prove an enticing offer, given China’s extreme reluctance to see any American ABM network in the region.

So, what should a prospective deal look like? Specifically, Washington should seek a moratorium on ballistic missile testing for ten years, a freeze on the production and testing of North Korean nuclear weapons, and regular access to nuclear facilities by nuclear inspectors. In exchange, Washington should offer an end to bilateral and multilateral sanctions and an assurance the U.S. will not pursue regime change in North Korea. Opponents will attack such a deal for tacitly “accepting” a North Korean nuclear capability, but this is a weak argument. It is already all too clear the North Koreans have a functioning – and expanding – nuclear arsenal. Halting the nuclear testing and production, as well as securing an end to ballistic weapons testing, would be a victory for the U.S. and its allies. Should negotiations and implementation prove fruitful, Washington could seek its goal of the complete denuclearization of the Korean peninsula in a future agreement.

There is no magic bullet for dealing with North Korea’s nuclear weapons: to date, only South Africa has abolished their weapons program after crossing the nuclear threshold. However, as North Korea’s nuclear and ballistic technology becomes increasingly sophisticated and tensions continue to rise in the Asia-Pacific the threat is growing. The challenge is daunting, but the first step will be making North Korea – and Asia-Pacific nuclear security – a priority.

Robert Cantelmo (@RobertCantelmo) is an international affairs analyst based in Washington, DC. He writes on U.S. national security and strategy.