A Dangerous Game in the South China Sea: Is Japan Ready to 'Set Sail'? 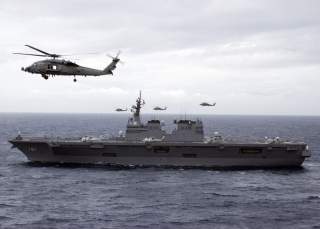 Following the freedom of navigation patrols operation (FONOP) in the South China Sea (SCS) by the guided-missile destroyer USS Lassen, a key question is whether Washington’s allies will also signal to China that its ‘land reclamation’ activities were in violation with the United Nations Convention on the Law of the Sea (UNCLOS).

In particular, the U.S. will look to Australia and Japan, its closest allies in the Asia-Pacific who, alongside the Philippines, were quick to provide diplomatic support for the operation. From Canberra’s perspective, it’s important to assess whether Tokyo will be prepared to join U.S. patrols as part of a regional cost imposing strategy on China.

Expectations have been growing that Japan might indeed significantly lift its strategic game in the SCS. They have been nurtured in the recent past by senior Japanese politicians and military leaders. In February this year, Defence Minister, Gen Nakatani, flagged the possibility of Japanese ships joining U.S. patrols in the area.

In June, the Chief of the Joint Staff of the Japan Self-Defence Forces, Admiral Katsutoshi Kawano, also indicated that a Japanese FONOP was a future possibility. Moreover, under Prime Minister Shinzo Abe Japan significantly enhanced its defence cooperation with a number of Southeast Asian countries, most notably the Philippines, Vietnam and more recently Indonesia. For instance, in June 2015 Japan’s Maritime Self-Defence Force (MSDF) conducted a naval exercise with the Philippines as a means to demonstrate solidarity.

Tokyo also further strengthened its defense relations with its U.S. ally, Australia and India—all of which (to varying degrees) have sought to counter China’s activities in the SCS. The overall impression is that Japan intends to play a greater role in influencing Southeast Asian power dynamics.

However, it’s unlikely that Japanese warships will participate in FONOPS any time soon. Domestically, the Abe government faces an electorate highly sceptical of his efforts to pave the way for a more muscular Japanese strategic and defence policy.

The Prime Minister himself admitted that his successful push for a revision of security laws in September this year, enabling the Japanese Self-Defence Force (JSDF) to fight overseas for the first time since WWII, failed to win popular support. Consequently, a FONOP in the SCS at this point of time would be rejected by a large part of the media, the electorate, the opposition parties and Abe’s coalition partner, the New Komeito.

Moreover, such an operation would fly in the face of Japan’s interest in improving relations with China which have entered calmer waters after a long period of heightened tensions over the Senkaku/Diaoyu Islands dispute. From Tokyo’s point of view, there’s no need to unnecessarily provoke Beijing at this time.

After all, Japan isn’t a party to the territorial conflict in the SCS. And China is likely to react extremely sensitively to a Japanese FONOP around one of its artificial islands in the SCS, setting back the progress made since Abe and his Chinese counterpart shook hands in November 2014. It should also be noted that Japan’s strategic focus is on the defense of its many islands against Chinese assertiveness. FONOPS in the SCS could thus very quickly overstretch the capabilities of the JSDF.

As a result, Japanese patrols in the SCS in support of US FONOPS are unlikely any time soon. That said, the strategic game of signalling and posturing in the SCS has only just begun.

Just like Australia, Japan has a fundamental interest in the maintenance of a rules-based maritime order in the Western Pacific. Should China’s strategic behaviour in these waters continue unabated, Japan could indeed change its rather modest military engagement there. And it’s likely that U.S. pressure on Japan to show the flag in the SCS will also intensify.

In this context, Australia’s position on the conduct of FONOPS might become an important factor for Japan’s own response. Should Canberra decide to exercise its options for such operations within 12 nautical miles of China’s artificial islands, Tokyo might reconsider its current reluctance to change its approach to the FONOPS.

Both sides should therefore use the opportunities for high-level bilateral meetings during a number of summits in November (ADMM+ in Malaysia, APEC in the Philippines, and the G-20 in Antalya) to discuss their approaches and joint responses. As well, the trilateral security relationship between Australia, Japan and the United States should be utilised to discuss the potential and limitations of ‘cost imposing’ strategies on China.

Doing so might deliver a clearer picture to what extent these three players are really prepared to stand up to China’s assertive behaviour in maritime Southeast Asia. For the time being, however, we shouldn’t expect too much from Japan.