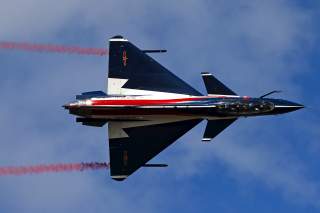 The Chinese military appears to be working on a fast, radar-evading robotic fighter plane that could be the first of its kind anywhere in the world.

The Dark Sword drone, as it’s known, is the latest in a long line of jet-powered unmanned aerial vehicles that the Shenyang Aircraft Corporation and sister firms have been developing since the early 2000s.,

The UAV first appeared in a photo that began circulating on social media in early June 2018. The photo depicts a sleek, roughly 30-foot-long aircraft bearing several of the signature features of supersonic stealth warplanes.

Dark Sword has not been observed in flight and some skeptics have questioned whether it’s a functional aircraft or merely a non-flying mock-up. Small scale models of the Dark Sword design have frequently appeared at industrial events in China and abroad.

Shenyang Aircraft Corporation’s parent company did not respond to an email seeking comment.

“It’s difficult to tell exactly what we are looking at—a [full-scale] shape-and-size model, an engineering mock-up, something more or something less,” Doug Barrie, an air-power expert at the International Institute for Strategic Studies think tank, told me.

Given that Shenyang has been working on similar drones for years, however, it’s “feasible that hardware exists,” Barrie added.

Todd Humphreys, a drone expert at the University of Texas, told me he believes the object in the photo is indeed legit. “Given China’s historical interest in developing drones for combat, and their proven prowess in supersonic and stealthy aircraft,” Humphreys said, “my guess is that this photo shows a real working combat UAV, not a mock-up.”

Given that Shenyang has been working on similar drones for years, it’s “feasible that hardware exists,” Barrie said. In any event, the implications are huge. If and when Dark Sword actually enters service, it could give the Chinese air force a big advantage over its rivals, including the U.S. Air Force.

Shenyang probably intends Dark Sword to function as a pilotless stealth fighter that can fly faster than the speed of sound and avoid detection by enemy sensors. The vehicle’s distinctive protruding air intake, what engineers call a “divertless inlet,” allows for supersonic flight while also masking engine components from probing enemy radars. Divertless inlets are key to the stealthiness of the U.S. military’s F-35 manned stealth fighter as well as China’s own J-20 stealth fighter.

The Chinese drone’s dark-colored exterior could point to the kind of radar-absorbing coating that’s also found on the F-35 and J-20. Dark Sword’s sharp angles could also help hide it from the enemy as it speeds past. “The design does show the kind of shaping associated with radar signature reduction, and also for supersonic flight,” Barrie said.

That combination of stealth and speed sets Dark Sword apart. The United States and Europe are both developing stealthy drones and fast drones. But no other country besides China is openly working on a single combat UAV design that is both stealthy and fast.

There are several ways the Chinese air force could use Dark Sword, according to Humphreys. “It probably has multiple options for command and control,” he said, including remote control by a human operator or fully autonomous flight. “China does not seem to share the qualms we have in the U.S. about making fully autonomous combat drones.”