DARPA's Mad Scientists Might Be on Verge of Building Reusable 'Swarms' 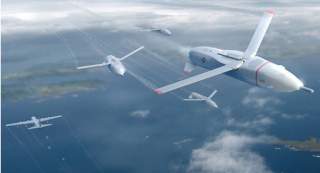 The Defense Advanced Research Project Agency plans to demonstrate an ability to launch and recover small drones from an Air Force C-130 aircraft as part of its continued development of the Gremlins program - a technical effort designed to deploy groups of small drones carrying 60-pound sensor payloads up to ranges of 300 nautical miles.

The program is expected to culminate in an air launch and recovery demonstration in 2019, DoD officials said.

The drones are intended to perform a range of missions, such as testing enemy air defenses and conducting ISR missions for an hour on station before returning to an Air Force C-130, developers said. A key concept of the program is extending the mission range of aircraft, while allowing manned crews to operate at safer distances.

Gremlins moves beyond existing state-of-the-art programs able which are able to launch, but not recover, swarms of mini-drones. The Pentagon’s Strategic Capabilities Office, an initiative aimed at harnessing near-term emerging technologies for operational use, demonstrated an ability to launch small drones from the flare dispenser of an F-16. While able to blanket areas with ISR and perform significant mission-enhancing functions, they are expendable and not available for re-use.

“For decades, U.S. military air operations have relied on increasingly capable multi-function manned aircraft to execute critical combat and non-combat missions. Adversaries’ abilities to detect and engage those aircraft from longer ranges have improved over time as well,” said DARPA in a statement.

Gremlins could well be described as a technological leap in manned-unmanned teaming beyond state of the art technology, as it enables drones to launch, perform missions and then return to a host aircraft. As algorithms for increased levels of autonomy advance, aircraft will be able to control drones from the cockpit with a pilot in a command and control role, service experts have explained.

At the moment, Army helicopters can used "manned-unmanned" teaming to control the flight path and sensor payload of nearby drones, and senior Air Force developers have told Warrior Maven that F-35 and F-22 fighter jets may soon have the technical ability to navigate multiple drones from the air.

The idea is to use unmanned aircraft to perform ISR missions, delivery weapons or test high-risk air defenses or enemy formations without putting pilots in harm's way.

As of earlier this year, DARPA has continued its contract with General Atomics Aeronautical Systems and Dynetics to move Gremlins into the next phase of development, an effort which involves testing and a Preliminary Design Review.

The Gremlins’ expected lifetime of about 20 uses provides significant cost advantages over expendable systems by reducing payload and airframe costs and by having lower mission and maintenance costs than conventional platforms, a General Atomics statement said.

“We see the potential for using this technology on our own Predator B/MQ-9 Reaper® to offer our customers new mission capabilities,” David R. Alexander, president, Aircraft Systems, GA-ASI, said in a written statement.