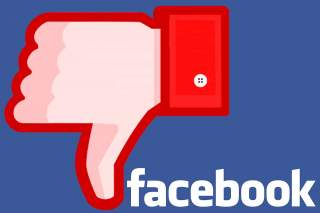 There are plenty of lunatics on Facebook, Twitter and other social media. Not to mention trolls, haters and other assorted unpleasantness.

Most are harmless. A few are terrorists and insurgents who would love nothing better than to kill U.S. troops.

So, how do you tell the loonies and the loudmouths from the real killers?

DARPA wants to figure out how.

The Pentagon's cutting-edge research agency wants software that can sift through social media, and determine whether the person writing "Death to America" on Facebook is just venting steam -- or is about to strap on an explosive vest and launch a suicide attack on American soldiers.

The challenge here isn't to scan social media. "Big data" corporations and marketing firms have already become expert at analyzing our Facebook and Twitter posts so they can show us advertisements and news that they think we'll be interested in.

The fact that they mostly send us things we're not interested in indicates just how tough it is to determine what people like by what they post. What DARPA is proposing is an order of magnitude more difficult: deducing an actual intent to commit violence based on someone's social media trail.

DARPA is also anticipating an inevitable backlash from those who will complain that sifting through social media, in an attempt to identify whether someone is likely to be a terrorist, is an invasion of privacy. Thus DARPA wants software that can potential attackers while "ensuring privacy and appropriately addressing personally identifiable information that may be found in PAI."

However, DARPA's proposal did not raise another potential controversy, which would be the danger of profiling. Can software analyze social media, that encompasses multiple nations, cultures and languages, in an unbiased way so that, say, an Algerian Muslim posting on Facebook will not automatically be deemed more suspicious than a Norwegian Christian?

As usual with DARPA Small Business Innovation Research projects, there will be three phases. The first is to prove that the underlying theoretical framework can actually deduce intent from social media. The second is to build prototype software.

It's the final phase that's particularly interesting. Naturally, the primary goal is to develop a system that will alert U.S. troops to potential attacks. But as is customary with Pentagon research projects, there is also a promise that a successful product will have civilian as well as military applications.

In other words, if the government figures out which Facebook users will plant bombs, then big corporations can figure out which toothpaste you'll buy.