Deadly Duo: The U.S. Air Force is Trying to Link Together Stealth F-22s and F-15s 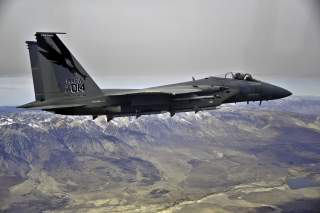 Boeing and the United States Air Force recently demonstrated the capabilities of the Talon HATE advanced datalink pod onboard the F-15C Eagle to connect the venerable air superiority fighter to newer fifth-generation fighters.

The new pod—which can connect via Link 16, Common Data Link and Wideband Global SATCOM satellites—allows the fourth-generation jets to plug into the fifth-generation Lockheed Martin F-22 Raptor air superiority fighter and to ground stations using the fifth-generation jets’ own network. While the Raptor has its own proprietary Intra-Flight Data Link (IFDL), the F-22 does not have the ability to transmit on the standard Link-16 network—though it can receive data. The Talon HATE allows the F-15 to connect with the Raptor’s IFDL network.

“This aerial network is a giant leap forward in tactical fighter capability with real-time connectivity and expanded information sharing,” said Paul Geery, vice president of Boeing’s Phantom Works Mission Solutions and the company’s Talon HATE program manager. “We are now demonstrating secure datalink connections between F-15Cs and F-22s in a way that integrates information for the pilot into a common operating picture.”

The key to the Talon HATE system is that it can share information between the F-22, F-15C and other platforms in real time. Right now, F-22 and F-15C pilots—who are the Air Force’s air superiority team—are forced to share data via voice communication over encrypted radio. The process, while effective, is inefficient. Real time machine-to-machine data transfers would allow the Air Force’s two key air dominance platforms to seamlessly share their data—and perhaps more importantly—share targeting information. Thus, a F-15C could use its AIM-120 AMRAAMs to engage a target that is being spotted far ahead by a stealthy F-22—without forcing the Raptor to use its expend its limited payload of missiles.

According to the Air Force, the most recent Talon HATE tests at Nellis Air Force Base in Nevada showed that the system could handle multiple aircraft on the network in realistic conditions. “We’ve completed developmental flight test,” Lt. Col. Christopher Bradley, Air Force’s Talon HATE manager said. “We look forward to fielding this system, not only to immediately provide aircrews with actionable information faster and at a higher quality, but also to help the Air Force learn important lessons for the employment of tactical gateway systems in the future.”

Indeed, the full potential of the Talon HATE system has yet to be fully realized. Only when frontline combat air forces squadrons learn how to use the system will the service realize the Talon HATE’s true potential. Those frontline units will develop new tactics and procedures in ways the developers never imagined possible. But already, the Talon HATE shows great promise.