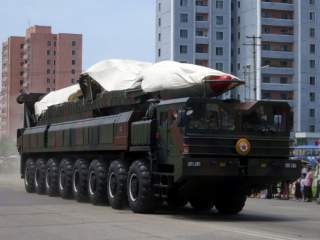 North Korea’s ruler, Kim Jong-un, has outlined his country’s nuclear weapon policy. At the Workers’ Party Congress, now in session, he announced that “as a responsible nuclear weapons state, our Republic will not use a nuclear weapon unless its sovereignty is encroached upon by any aggressive hostile forces with nukes.” He also said “North Korea will faithfully fulfill its obligation for non-proliferation and strive for the global denuclearization.”

This last statement is totally inconsistent with North Korea’s record. North Korea withdrew from the NPT (Nuclear Non-Proliferation Treaty) in 2003. Subsequently it has conducted four nuclear tests, and a further nuclear test appears imminent. Mr Kim has posed on television with what was presented as a nuclear warhead. North Korea has test-fired a variety of ballistic missiles, including intercontinental and submarine-launched missiles. And North Korea has helped the nuclear proliferation efforts of other countries, the most spectacular example being the construction of a plutonium production reactor in Syria (bombed by Israel in 2007). Currently North Korea is believed to have enough plutonium for around a dozen nuclear weapons, and is also believed to be producing highly enriched uranium (HEU), though the quantity is not known.

Most experts consider that North Korea’s claims are exaggerated. To date its nuclear tests have been small-scale, its claims to have successfully tested a hydrogen bomb are discounted, and most of its missile tests are evident failures. Nonetheless, there is no doubt that over time, if nothing changes, North Korea’s capabilities will continue to improve. It could possibly have a missile, albeit of uncertain reliability, capable of reaching the US mainland with a nuclear warhead by the end of this decade.

South Korea and Japan are increasingly agitated about North Korean developments. In both countries there is public discussion of whether they should renounce their nonproliferation commitments and develop nuclear weapons of their own. China, supposedly North Korea’s ally, also has every reason to worry about the dangers of North Korea’s behaviour. It is imperative to find a circuit breaker before the situation escalates into a major regional crisis.

Sanctions Not Doing the Job:

What can be done? UN and national sanctions on North Korea have been toughened, but realistically sanctions are unlikely to change North Korea’s behavior. The nuclear program has been given major political prominence, enshrined in the constitution and in party ideology. Moreover, sanctions are not being fully enforced (for example the border with China is notoriously leaky), and to date China has not been prepared to support sanctions that are strong enough to undermine the North Korean regime.

The only real prospect of persuading North Korea to change direction is by engaging with the regime on the issues that are driving it towards nuclear weapons, and to show that changing direction can bring substantial benefits. In other words, there is a need to return to negotiations and to discuss incentives as well as sanctions. The Six-Party Talks last met in 2008. There is a need to revive these talks or establish a similar process.

Realistically, could negotiations proceed in good faith? This really comes down to a question of what North Korea really wants. The only way to find out would be to start negotiations and see where they lead. While the central importance the North Korean leadership has given to the nuclear program seems to make negotiations pointless, there is room for flexibility if the leadership so chooses. Kim Jong-un has put forward the ideology of pyongjin. This calls for three objectives to be pursued simultaneously: economic development; nuclear technology for peaceful purposes; and nuclear technology for military purposes. The relative weight attached to each objective depends on the leadership.

North Korea has to understand that the international community will not accept it as a nuclear weapon state. Even North Korea’s longstanding friend, Iran, has made this clear: in his visit to Seoul last week President Rouhani stressed Iran’s opposition to any form of nuclear weapons development on the Korean peninsula. If North Korea is absolutely determined to be a nuclear weapon state then negotiations cannot succeed. On the other hand, it is unrealistic to demand that North Korea relinquishes its nuclear program in the near term. Engagement can start a process of building the trust needed for eventual denuclearization.

North Korea has made it clear for many years that it wants a peace settlement in place of the 1953 Korean Armistice Agreement. The armistice, concluded between North Korea, the US and China, was to 'insure a complete cessation of hostilities and of all acts of armed force in Korea until a final peaceful settlement is achieved'. North Korea considers it needs a nuclear deterrent because until there is a final peaceful settlement the Korean War has not ended.

Is a Peace Treaty Possible?

A starting point in addressing the nuclear program, therefore, should be to propose negotiation of a peace treaty. This would involve close collaboration between the US and China, which is the third party to the armistice and the country most able to influence North Korea. A complication is that North Korea and the US see a peace treaty differently. For the US, this would come at the end of negotiations covering a range of subjects, especially denuclearisation. For North Korea, a peace treaty would be a relatively simple agreement ending the armistice. This would be followed by negotiation of a comprehensive peace settlement, a process that would cover many aspects — including borders and conventional force reductions — and could take years to conclude. Denuclearisation could be considered only as part of this longer process. A particularly difficult issue is that North Korea sees denuclearisation of the Korean peninsula as including dissolution of the US/South Korean alliance arrangements and removal of the US 'nuclear umbrella'.

As this last issue shows, negotiation with North Korea won’t be easy. There is a massive lack of trust to be overcome, on both sides. For this reason effective verification and monitoring arrangements, both for the nuclear program and conventional force reductions, would be an essential part of any deal. The Six-Party Talks ended over failure to agree on verification arrangements. Getting North Korean acceptance of verification will be one of many challenges.

The immediate aim of negotiations would be to secure a freeze to North Korea’s nuclear and missile programs, in exchange for a peace treaty ending the armistice. Initially there would have to be a commitment against any further nuclear weapon and nuclear-capable missile tests. As negotiations progress to the specifics of a broader peaceful settlement, the freeze would have to extend to a verified cessation of plutonium and HEU production. The broader settlement will have to include incentives sufficiently attractive for North Korea to maintain the freeze and, in time, to dismantle the nuclear and missile programs.

North Korea must be left in no doubt that if it is not prepared to enter into serious negotiations and to freeze its nuclear and missile programs, then the international community will have no choice but to take whatever action is necessary to stop these programs from becoming a greater threat. To this end, China must be persuaded that if North Korea rejects good faith efforts to find a negotiated outcome, China’s own national interest requires it to do everything it can to avoid an escalating crisis.

Negotiations with North Korea will require a sustained effort possibly over a period of years. At this stage in the life of the Obama Administration, and given the domestic political difficulties of engagement, it is likely this effort will be left to the next President. It must then be considered as a matter of the highest priority. We must hope that North Korea does nothing in the meantime to make engagement even harder.