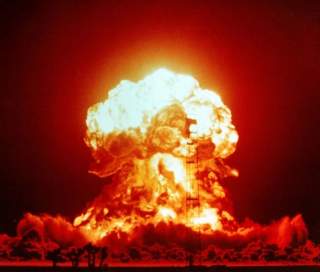 This week the New Indian Express reported that on Saturday the Defense Research Development Organization (DRDO), India’s top defense technology agency, will conduct the first canister test of its Agni-V at the Integrated Test Range (ITR) on Wheeler Island.

According to the newspaper, over three hundred scientists from various government agencies are currently preparing for the test. The report said that “During the test, Agni-V will be fired from a sealed canister mounted on a launcher truck. With a dummy payload, the missile will be pushed out of the canister by a gas generator after which the actual stage separations will occur as per the coordination.”

The test has been postponed twice since December owing to President Obama’s India trip and a scheduling conflict with Prime Minister Modi, who had expressed interest in watching the test in person. It’s unclear if Modi will attend the test on Saturday, however, the test is expected to proceed as scheduled in honor of outgoing DRDO chief Avinash Chander, who is widely regarded as the architect of the Agni missile class. Chander was fired earlier this month over scandals regarding Indian defense contracts.

The Agni-V is a three-stage, solid-fueled missile that can travel 5,000 km while carrying a 1,000 km payload, making it India’s longest range missile. It is often referred to as India’s first intercontinental ballistic missile (ICBM) in local media. Although it demonstrates mastery of all the necessary ICBM technologies, technically it is only an intermediate ballistic missile as ICBMs have ranges of at least 5,500 km.

It was quickly dubbed the “China killer” by Indian media outlets when it was first tested in 2012 because it is the first Indian ballistic missile capable of holding most of China— including major cities like Beijing— under nuclear threat. China has long had the ability to reach all of India with nuclear-armed missiles, putting Delhi at a relative disadvantage.
This will be the third time India has tested the Agni-V following the first test in 2012 and another one in 2013. A month before the second test, Tessy Thomas, the director of the Agni Missile Project at DRDO, said that the Agni-V would be tested two or three more times before being inducted into the Indian armed forces.

This raises the possibility that the Indian military will receive the missile following Saturday’s test, should it prove successful. This is especially true given that this will be a full canister test of the missile, which is one of the most highly touted advances the Agni-V makes over its predecessors. As Times of India explained following the first test, “Unlike the earlier largely rail-mobile missiles, Agni-V can be easily stored in hermetically sealed canisters and swiftly transported atop launcher trucks by road. This will give the armed forces the required operational flexibility to pick and choose from where to launch the missiles.” TOI also noted that the Agni-V boasts “a ‘highly accurate’ inertial navigation system.

Once inducted into the armed forces, DRDO will go to work on equipping future Agni-V missiles with multiple independently targetable reentry vehicles (MIRVs), which will allow each missile to carry between three and ten nuclear warheads, each of one of which can be aimed at a different target. As The National Interest has noted in the past, China is also building MIRVed missiles, setting the stage for a dangerous arms race that could destabilize nuclear Asia.