Did Air Force B-52 Bombers Just Practice an Attack on China? 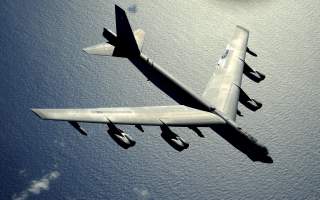 A pair of US B-52 Stratofortress strategic bombers reportedly flew within 250 kilometers of Guangdong’s coastline in southern China on Tuesday afternoon, according to Taiwan media and Aircraft Spots, a Twitter group that tracks aircraft movement and the deployment of the US Air Force.

The two long-range bombers, bearing registration numbers 57-1454 and 60-0360 with call signs HERO01 and HERO02, were spotted above the Bashi Channel between Taiwan and the Philippines and were believed to have come from the US outpost of Guam.

The bombers flew westward into the northern portion of the South China Sea and circled for about an hour above the Pratas Islands controlled by Taiwan, about 340 kilometers southeast of Hong Kong, before following another zigzag path back to the Kadena Air Base in the US territory, as shown in flight tracks posted by Aircraft Spots. It is also believed that the two bombers conducted air-to-air refueling near Okinawa.

The Taipei-based Liberty Times noted that rarely had US strategic bombers been seen above the waters close to the Chinese shore, where People’s Liberation Army bombers and spy planes such as H-6Ks used to frequent the air routes, when Beijing dispatched squadrons of aircraft to circumnavigate Taiwan.

The paper said the flight route indicated the bombers could have been involved in a mock attack involving Tomahawk cruise missiles targeting Guangdong’s coastal areas.

The maximum hit radius of a Tomahawk cruise missile is 2,500km. If fired from the Pratas Islands, a large number of PLA military installations would be within range.

The emergence of the B-52s was a tacit message that the US would respond if Beijing were to continue with its breaches of Taiwan’s airspace, said observers.

It is discernible that Beijing has sought to penetrate the blockade of the so called Second Island Chain – formed by the Ogasawara Islands and Volcano Islands of Japan, in addition to the US territory of Mariana Islands – with retrofitted H-6K bombers with extended range, fitted with precision-guided munitions, such as the air-launched version of the CJ-10K land-attack missiles.

These missiles have an operational range of 1,500km and are capable of hitting targets in Guam if fired from H-6Ks above the waters off Taiwan’s Pacific coast.

Also, rumor has it that Beijing’s H-6Ks, with aerial refueling, could fly close to Guam for direct bombardment, though the somewhat antiquated Chinese bombers modeled on a Soviet design have no stealth capabilities and could easily be detected by radar in Taiwan, Japan and Guam.

China’s defense ministry is yet to respond to the possible intrusion of China’s air defense zone and it is unclear if Chinese radar was triggered or Chinese aircraft conducted an interception.

But Chinese news portal Sina noted in a commentary on Thursday that the bulky B-52 bombers were equally vulnerable to Chinese radar, airborne early warning aircraft and even the powerful S-400 Triumf anti-aircraft missiles imported from Russia.