Did China Just Admit Its Aircraft Carrier Is a Paper Tiger? 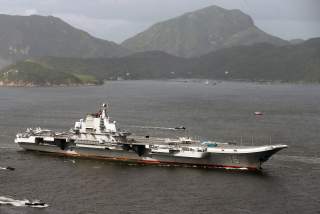 It requires “a little bit luck plus a strong body and mind” to land a plane safely on the deck of China’s sole aircraft carrier Liaoning, China Central Television has revealed.

A report on the state broadcaster cited a 17-year veteran pilot surnamed Xu who said that the ski-jump take-off from the carrier, which has a curled-up bow, is “much easier than landing” due to the refurbished Soviet vessel’s short take-off and the tricky system used to stop planes after they land on the deck.

In order to become airborne from the carrier, warplanes such as the J-15 fighters must shed weaponry and fuel to reduce their launch weight.

CCTV said the People’s Liberation Army Navy had made many retrofits to the carrier since the vessel was commissioned in 2012, after eight years of painstaking endeavor to complete the former hulk, which was built in Ukraine before being sold and taken to a port in Dalian.

The main equipment and systems onboard the Liaoning – over 1,200 technological items – were all domestically developed, according to the Chinese defense ministry.

Part of the aviation support system was a locally designed and made jet blast deflector, which can withstand temperatures as high as 1,800C. This device, also known as a blast fence, is needed to redirect the high energy exhaust from jet engines.

The Chinese carrier is conventionally powered with steam turbines and can reach a maximum speed of 28 knots (51.9 km/h). But it lags significantly behind the US’s many nuclear-powered carriers.

The TV report, intended to whip up support for last week’s South China Sea naval parade, indicated that the carrier has little room for further renovation due to structural constraints and “congenital” defects – and that the PLA is anxious to upgrade its fleet of carrier-borne fighters.

Criticism of the J-15 has appeared in several Chinese media outlets including Xinhua and the nation’s main military newspapers this year, saying the aircraft’s shortcomings are obvious as it belongs to the third generation of fighters.

The J-15, a copy of the antiquated Russian Sukhoi Su-33, cannot match the short-takeoff and vertical-landing capabilities of America’s stealthy F-35s. Analysts say the J-15 is almost on par with the US Navy’s Grumman F-14 Tomcat supersonic, twin-engine fighter aircraft that were retired from service more than a decade ago and have been replaced by the Boeing F/A-18E/F Super Hornet.

Still, Senior Captain Cao Weidong, a researcher with the PLA Naval Military Studies Research Institute, said the fact that Liaoning sailed alongside groups of destroyers, frigates, submarines and aircraft in a convoy highlighted the Navy’s capability to coordinate and integrate an armada of vessels and aircraft in sea patrols and amphibious offensives.

Wu Peixin, a Beijing-based defense analyst, told the People’s Daily that 10 years ago overseas observers would not have been able to imagine that China could build and marshal a complete carrier strike group so soon.

“But now, other than the Liaoning, we will soon begin commissioning a domestically built carrier and several of the world’s mightiest destroyers, like the 10,000-ton Type 055 class destroyers, which some foreign naval experts call cruisers.”