Did China Just Create the "Holy Grail" Of Submarine Technologies? 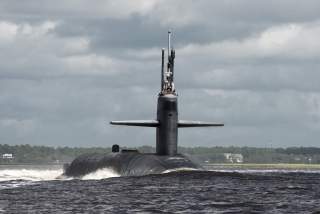 The Chinese People’s Liberation Army Navy (PLAN) claims to have developed new electrically-powered pump-jet propulsor that would theoretically be much quieter than any current generation Western submarine propulsion system.

Unlike a conventional propulsor design—which is turned by a mechanical drive shaft—China’s rim-driven system is powered by an electrical motor embedded in the propulsor’s shroud.

Theoretically, without a drive-shaft, a submarine should be much quieter, and thus much more difficult to detect. Additionally, the Chinese are claiming that the new propulsor could reduce cavitation, which would also significantly help to improve a submarine’s acoustical signature performance.

“This is one of our work team’s first world-leading projects, which has been used on [China’s] next-generation nuclear submarines,” PLAN Rear Admiral Ma Weiming told China Central Television in May according to SCMP.

“[Our technology] is now way ahead of the United States, which has also been developing similar technology.”

Ma told the Chinese television channel that the new rim-driven pump-jet will be fitted onto the PLAN’s next-generation nuclear submarines. Those vessels might include versions of the nuclear-powered Type 095 attack submarines and the Type 096 ballistic missile submarines. However, PLAN has not confirmed which of its new submarines might receive the new propulsor technology.

The U.S. Navy uses pump-jet propulsor technology onboard its Improved Los Angeles, Seawolf and Virginia-class attack submarines. The U.S. Navy is also planning to use a pumpjet propulsor onboard its forthcoming Columbia-class nuclear-powered ballistic missile submarines. The Columbia-class will use integrated electrical propulsion with a permanent-magnet motor turning the submarine’s drive shaft.

Developing a shaftless propulsion system is something akin to the holy grail of submarine propulsion. U.S. naval experts are skeptical of the Chinese claims.

“I read this earlier this morning and concluded that the PLAN propaganda machine was busy on July 4th,” Bryan McGrath, managing director of the FerryBridge Group naval consultancy, told me.

But while McGrath is skeptical, if the Chinese claims prove to be true, it could be something significant.

“And there is no question in my mind that the undersea advantage we enjoy will come under increasing pressure from PLAN capabilities. But quieter that U.S. subs? No.”

Thus, if the Chinese have managed to successfully develop a rim-driven pumpjet propulsor that works in a real world operational setting, it would be a significant development. It would mean that the PLAN is making genuine progress in developing novel submarine technologies and that it is starting to catch up. But there is more to a submarine’s acoustical stealth than just the propulsion system, and it will take time and a lot of trial and error before the PLAN can match or exceed American capabilities in the undersea domain.