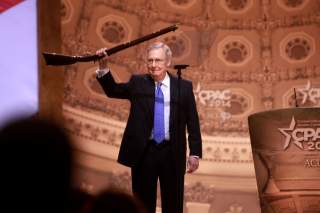 Numerous reports indicate that a major reason the P5+1 and Iran failed to reach a nuclear agreement was because Tehran doubted that the White House’ could persuade Congress to lift the sanctions against it. Purportedly, U.S. negotiators offered to suspend the sanctions through presidential waivers, which Iran rejected because there would be no guarantee future administrations would continue this practice. This is a legitimate concerns and the Obama administration will need to exert every effort to reassure Tehran. In dealing with Congress, the administration should first negotiate, then lambast, and then be prepared to “go solo” if all else fails.

To be sure, there are creative methods that would allow the administration to circumvent the sanctions without congressional approval. Before sidestepping the incoming Republican-led Congress, however, the Obama administration should negotiate with Capitol Hill in earnest. In doing so, the administration could find itself in negotiations that are every bit as arduous as those with Iran. The administration could have little choice but to use other policy issues as bargaining chips to get Congress to remove sanctions against Iran. There are a number of potential issues the Obama administration could use to reach a grand bargain with congressional Republicans, including flexibility on budgetary matters, approving the Keystone pipeline, revisiting the coal plant emissions limit, and/or compromising on future immigration reform, to name a few.

One obstacle to this process could be the president himself. It is no secret that President Obama has little enthusiasm for “wheeling and dealing” and “back slapping” with congressional leaders. Nonetheless, the administration simply has to include Republicans in the process if it wants to get the congressionally mandated sanctions against Iran repealed.

Should a charm offensive fail, President Obama can try and lambast lawmakers into action much like he did last year when Congress tried to pass additional sanctions after the interim agreement was signed. In that instance, President Obama the sanctions push by dispatching Vice President Joe Biden and Secretary of State John Kerry to lobby Congress, while also inviting lawmakers and Hill staffers to the White House for special briefings. Simultaneously, the president and other senior officials launched a major PR campaign outlining the dire consequences imposing more sanctions could have for U.S. national security.

A similar effort might work in persuading Congress to lift the sanctions against Iran. Having won majorities in both chambers of Congress, and with an eye towards the 2016 presidential election, Republicans will want to portray themselves as capable of governing. This can only happen, however, if the GOP appeals to the broader American populace, which just so happens to favor making a deal with Iran. As such, publicly lambasting Republicans could force them to make compromises on Iran sanctions.

If negotiations and public shaming fail, a creative method for ensuring continued sanctions waivers in a post-Obama environment could be to codify them within a UN Security Council resolution. That is, within a larger UNSC resolution, the U.S. could assure Iran that it will honor its commitment to provide sanctions relief. Such action would mandate the United States, the other members of the so-called P5+1 and UN members at-large to repeal sanctions against Iran and refrain from adopting nuclear-related restrictive measures so long as Tehran remains in compliance with the final nuclear agreement.

Supplemented domestically by a blanket executive order by President Obama to continuously and automatically waive sanctions in accordance with the UN Security Council resolution, this will provide future U.S. presidents with the legal impetus and authority to continue waiving the sanctions. Of course, Congress can pass a bill barring the president from providing waivers and override the presidential veto that would likely follow with a two-thirds majority from each house in Congress, but such a scenario is uncommon and would require the Republican majority in the Senate to rally many Democrats toward their cause.

Moreover, by failing to uphold its end of a nuclear accord, the United States could damage its relations with the European members of the P5+1, particularly since the bloc is negotiating with Iran in good faith. It could also signal to its competitors, rivals and foes alike (i.e. China, Russia and North Korea) that the U.S. reneges on its commitments due to its dysfunctional political system.

Legal experts may disagree on the above approach but the intent here is to promote outside the box thinking in reaching a historic nuclear deal with Iran.

Navid Hassibi is a Non-Resident Fellow with the Washington DC-based Nuclear Security Working Group and a doctoral candidate with the Research Group in International Politics at the University of Antwerp. He tweets @navidhassibi. The views expressed here are his own.