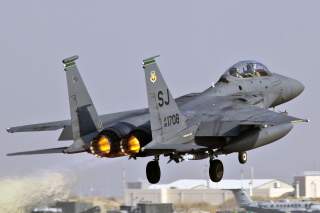 The Trump Administration’s rise to power has proven to be a boon for Boeing’s fighter programs.

In previous years, both the F/A-18E/F Super Hornet and F-15 Eagle production lines were expected to shut down as Lockheed Martin’s F-35 Joint Strike Fighter looked set to dominate the fighter market both domestically and internationally. However, with domestic defense funding boosted and new overseas sales, the future looks brighter for both jets.

“I think after several years of having to endure the damage of sequestration and a challenging defense budget, we're now seeing reemerging strength of that budget supported by both parties, and we're encouraged by the future year plans that we've seen,” Dennis Muilenburg, Boeing's chairman, president and Chief Executive Officer, told investors. “And that is something that has bolstered our expectations for our defense business going forward.”

The Trump Administration’s largesse has been particularly helpful for Boeing’s St Louis, Missouri, operations. “Now in particular to St. Louis, the support for individual programs there has been strong both domestically and internationally,” Denis Muilenberg said. “Our weapons business, which is based there, has been strong and we're continuing to see growth there in a number of programs and our fighter business. And that includes F-15 international sales as well as upgrades to the F-15 fleet domestically. And perhaps most encouragingly is the progress we're seeing on the F-18 Super Hornet line. And I think it's a testament to the quality of the product.”

Indeed, with the U.S. Navy’s decision to buy new Block III Super Hornets and refurbish older aircraft, the F/A-18E/F production line has seen a renaissance. “You can hear our customers are very supportive. The U.S. Navy and what that airplane is doing for them every day in the fleet is important,” Muilenberg said. “And we have a great program that's producing capability that our customers need. And we're looking forward to continuing to grow that program going forward.”

That is a turnaround from only a few years ago when it was expected that the Super Hornet production line would be shutdown. “A couple years ago, we had some questions about that production line,” Muilenberg said. “We can now see both the F-18 and the F-15 production lines extending far into next decade. And one good example of that is in the five-year future defense plan. We see a Navy request now for 110 new Super Hornets as well as the Service Life Extension Program for the existing Super Hornet fleet. So we're bullish about the fighter lines for the future.”

Thus, Boeing will survive long enough as a combat aircraft manufacturer to compete on the Navy and Air Force’s next generation fighter programs that are just starting to get underway.