Did India's Special Forces Just Send 'A Message' to China and Pakistan? 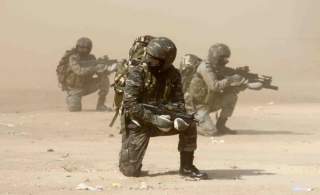 Early on Tuesday morning, 70 Indian special forces crossed into Myanmar from two north-eastern Indian states, Manipur and Nagaland, and killed more than a dozen militants of two groups, the SCN(K) and the Kanglei Yawol Kanna Lup (KYKL), that had ambushed and killed 18 Indian soldiers a week earlier.

Does this portend the new, more aggressive era of Indian counter-terrorism—and perhaps even covert operations—that many anticipated from Prime Minister Narendra Modi? While it's true that the speed of the Indian response is novel, some questionable lessons are being drawn in the breathless press coverage. This isn't helped by the fact that Indian accounts are presently mired in inconsistencies and contradictions.

The Indian television channel NDTV reports that the operation began at 3am, while the Indian Express puts it four hours later. NDTV says the Indian Army sent a note to its counterparts in Myanmar “minutes before ops began” and that the Indian ambassador met a minister in Myanmar only later in the morning, when government offices opened. It concludes: “this was a solo operation...not just on the ground, but also in the planning and implementation”.

But there's a whiff of official spin about this chronology. The Express' sources claim special forces were in “constant communication with Myanmar authorities”, and Praveen Swami notes that India received “high-level clearance” from Myanmar on Monday; India Today corroborates this. Most implausibly of all, Myanmar itself insists that it all took place on Indian soil. NDTV says casualties were estimated at 50 but could be as high as 100 or more and The Hindu agrees, while the Express puts it at just 14-18. The Hindustan Times reports that helicopter gunships provided support, and has printed a photograph of an Mi-35 reportedly flying towards Myanmar, though this detail isn't found anywhere else.

Conflicting details are inevitable in the aftermath of any such event, but it also seems that the Indian Government is furiously spinning the operation to its advantage. It is the same dynamic that resulted in shifting narratives on the U.S. raid against Osama bin Laden in 2011. NDTV is careful to note that India's National Security Adviser Ajit Doval, who has cultivated a swashbuckling persona in the press, and the Army Chief both personally 'camped' in Manipur, and that the Prime Minster's Office “monitored the sensitive operation in real time”. Given that the operation seems to have gone smoothly, it's naturally in the Government's interest to play up the risks (which were undoubtedly real) and the personal involvement of senior figures.

However, some also seem to be putting an even bolder spin on this: that it represents, according to India Today, “new rules of engagements to deal with terrorism and...Pakistan”, and, for NDTV, “a crucial message to China”.

These conclusions reflect decades of pent-up frustration with successive governments' unwillingness—prudent for some, pusillanimous for others—to impose a serious cost on Pakistan for its sponsorship of terrorist groups. But the extrapolation is tenuous and dangerous.

Raids conducted with the foreknowledge, express permission, and—though it's been denied—assistance of the neighboring state (say, with up-to-date maps or other intelligence) are entirely different to raids in non-permissive territory against hostile states. As Sushant Singh notes, India carried out joint cross-border operations in Myanmar in 1995 and in 2006, as well as in Bhutan in 2003. India and Myanmar reached an agreement for cross-border access in 2010 and Foreign Minister Sushma Swaraj raised the issue during a visit last August. It goes without saying that none of these conditions hold in the case of either Pakistan or China.

For a year, this Government has portrayed itself as breaking with the timidity of its predecessor: prepared to escalate shelling on the Line of Control with Pakistan, take covert action where necessary, and assert itself on the international stage. In this environment, it's easy to see how a single cross-border assault assisted by a neighbor is being hailed as Entebbe or Abbotabad. In truth, India's Special Forces capability has a long way to go.

In their book on the subject, retired Lieutenant General PC Katoch and journalist Saikat Datta note that India has over 20,000 special forces but 'one tenth' of U.S. capabilities, as a result of inadequate officer numbers, training, intelligence, language skills, air support, and a lack of centralized command. In another recent paper, George Perkovich and Toby Dalton cite Indian experts, including retired officials, who acknowledge that “India does not now have the capability to combine special operations in Pakistan with precision air support”, notwithstanding highly localized raids across the Line of Control.

Finally, India's foreign and security policy machinery needs to get better at handling these things. The Indian Army's own spokesman, perhaps hoping to avoid embarrassing Myanmar, assiduously avoided any suggestion that India had crossed the border. His effort was quickly undone by bombastic tweets from a junior minister in charge of broadcasting, Rajyavardhan Singh Rathore, who gleefully tweeted that Indian forces had gone “deep into another country”, promised that “we will strike at a place and at a time of out choosing”, and declared the raid “a message for all countries, including Pakistan”. For good measure, he threw in the off-message hashtag #ManipurRevenge. Handling public diplomacy to an over-caffeinated and tone-deaf minister is rather amateurish signaling—the substitution of quiet professionalism with jingoistic hyperbole.

As the dust settles, the Indian Government would do well to take stock of the various lessons – both encouraging and cautionary – that might be drawn from the past few days.