Did the Obama Administration Break the Law to Secure Bergdahl’s Release? 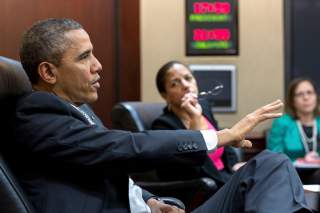 It took years of on-again off-again negotiations between the United States, the Taliban, and the Government of Qatar, but the Obama administration finally managed to pull it off: Sgt. Bowe Bergdahl, the only known American prisoner-of-war held by the Haqqani Network for nearly five years, is on his way to the United States to be reunited with his family.  The news of his release from the Taliban, who handed Bergdahl over to U.S. Special Forces in a remote section of eastern Afghanistan, caught most Americans off-guard.  But for the many diplomats, administration officials, and military personnel who were involved in the effort, winning Bergdahl’s freedom was a job well done.

Normally, the return of an American PoW would be the end of the story a cause for celebration.  However, Bergdahl’s case is somewhat unique from other American soldiers who found themselves in the enemy’s hands before being released in a classic prisoner exchange.  Indeed, in addition to being the only American PoW in the Iraq and Afghanistan era, Bergdahl’s release from his Taliban captors opened up a Pandora’s box of questions that strike at the core of America’s campaign against international terrorism over the past thirteen years.

For some senior Republicans, like Senator John McCain (who was a PoW himself in North Vietnam for five years), the concern is not that the Obama administration negotiated with terrorists to get an American soldier back home, but the concessions that the administration gave up for Bergdahl’s freedom.  The fact that the White House decided to release five senior Taliban commanders from the Guantanamo Bay detention facility—the prisoners were escorted by Qatari officials back to the Persian Gulf emirate, where they will be unable to travel freely for one year—is a highly controversial move on McCain’s part.  “These particular individuals,” McCain wrote in a statement, “are hardened terrorists who have the blood of Americans and countless Afghans on their hands. I am eager to learn what precise steps are being taken to ensure that these vicious and violent Taliban extremists never return to the fight against the United States…”

For Rep. Mike Rogers, the Chairman of the House Intelligence Committee, Bergdahl’s release came at a high price that could potentially cause considerable problems for U.S. national security.  “This fundamental shift in U.S. policy signals to terrorists around the world a greater incentive to take U.S. hostages,” Rogers said, and the exchange reverses decades of precedent where the United States refused to negotiate with terrorists of any kind.   The retiring Intel chairman expanded upon that theme Sunday morning on CNN in equally strong terms: every Al-Qaeda group around the world, Rogers commented, now has a greater incentive to kidnap Americans, with the added confidence that they will get something in return.

Politically speaking, the Obama administration can bat away these charges by pointing to a concrete accomplishment: getting a fellow American out of harms way and back to his family.  The White House, however, will have a much more difficult challenge in rebutting criticism from a growing membership in Congress, first leveled by Rep. Buck McKeon and Sen. James Inhofe, that the administration broke the law in order to snatch Bergdahl from the Taliban.

It’s been well known that the Republican-controlled House of Representatives has long placed severe restrictions on what President Obama can do on the issue of the Guantanamo detention facility.  Year after year, Congress has prohibited President Obama from using money appropriated in the defense budget to transfer detainees to the U.S. for incarceration or trial, and funds are barred from being used to construct facilities on U.S. soil that would hold GTMO prisoners.

Yet there is another restriction written into law and signed by the president that requires the executive branch to notify Congress ahead of time before any prisoners in GTMO are released to a third country.  Section 1035 of the 2014 National Defense Authorization Act demands that the Secretary of Defense notify the congressional armed services, intelligence, foreign affairs, and appropriations committees 30 days before any GTMO transfers occur.

Needless to say, that notification requirement was not followed—a fact confirmed by an administration official to The Washington Post.

To President Obama, the notification requirement and the stringent restrictions that Congress have placed on closing the Guantanamo facility are direct assaults on his constitutional authority to conduct foreign relations as Commander-in-Chief.  In a December 2013 signing statement, Obama strongly indicated that he would not comply with Congressional restrictions on Guantanamo, calling them “unwarranted” provisions that “violate constitutional separation of powers principle.”  In other words, Obama has consistently argued that he reserves the right to overrule what Congress has written into law on this issue.

Republicans, of course, are not buying this line of rationale.  While it’s easy to simply point to partisanship as the catalyst for their opposition, there are real constitutional questions involved—namely, does the president have the unilateral power under Article 2 of the U.S. Constitution to bypass congressional statute in order to get an American prisoner freed from captivity.

I’m not a lawyer, nor profess to be, so I don’t know the answer to such a question.  However, you can be sure that additional lawmakers in the coming week will hammer this line of inquiry into the ground, if for no other reason to defend Congress’ prerogative as a co-equal branch of government.  The fact that Chairman McKeon has indicated that his committee will hold hearings on the matter, and a push by Republicans on the Senate Armed Services Committee to establish a similar inquiry (the committee is scheduled to hold a classified briefing about the details of the Bergdahl-Taliban exchange on Tuesday, June 10), is a flashing red warning sign to an administration that would much rather prefer to use the return of an American PoW as a demonstration of its negotiating acumen.

Daniel R. DePetris is a Middle East analyst at Wikistrat, Inc., and an editor of the Atlantic Sentinel. Follow him on Twitter: @DanDePetris.