Did the Supreme Leader Cut Rouhani Down to Size? 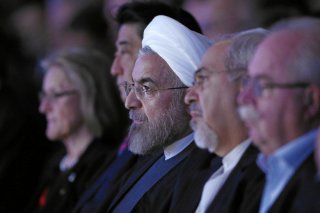 Coming off the success of the nuclear deal, Iranian President Hassan Rouhani has been flexing his political muscles in Tehran. Rouhani’s reform agenda aims to ‘fix’ deficiencies in the Islamic Republic’s political and economic system, and many hoped success in the nuclear negotiations would fuel his broader political agenda. Supreme Leader Ayatollah Khamenei, however, wants to ensure this reform program –and Rouhani’s political influence – do not get out of hand.

The President has decided to pick a fight on two issues: how the regime will approve the Joint Comprehensive Plan of Action (JCPOA) and how open upcoming elections for Parliament and the Assembly of Experts (the body who will choose the next supreme leader) will be handled. Neither contest is going well for him so far.

The president hoped that the JCPOA would not need approval from Parliament, just a recommendation from the body. Many parliamentary members are bitter at being cut out of the negotiating process (a role they held during President Ahmadinejad’s tenure) and skeptical the deal secures Iran’s interests. Rouhani did not want the potential damage from an open debate by his political detractors and a possible negative vote. He argued the real decision on the deal rests with the administration-dominated Supreme National Security Council. Rouhani even made a clever constitutional argument: because he had not signed the JCPOA, the deal was a voluntary agreement. If Parliament voted on it, it would become legally binding on Iran, an obligation that the other P5+1 members had avoided.

Most of Iran’s senior leaders support the deal and tried to remain neutral on the subject of legislative approval. But Rouhani’s conservative critics were having none of it. Conservative editor and political commentator Hossein Shariatmadari even called Rouhani’s professed concerns “baseless and lacking validity.” On September 3, Khamenei finally intervened in a speech before the Assembly of Experts:

Regarding the legal aspects of this issue and its requirements, suitable experts and legal experts should comment [on the nuclear deal]. But in general, I believe and I have said, ‘Mr. President, it is not in the best interest to exclude Parliament from reviewing the JCPOA.’…I discussed these issues and advised our dear brothers in government…and now I will express them in order to inform the Assembly of Experts and all the people.

Khamenei and other regime leaders are not necessarily backing away from the deal, but it is hard to see this as something other than a rebuke of Rouhani. This headache follows on the heels of other political bruises the president received over Iran’s upcoming February elections. Centrist and reformists candidates are expected to make a good showing on the coattails of Rouhani’s popularity. That is, if those candidates are allowed to run.

Iran’s Guardian Council vets those standing for elective office, but the council is dominated by conservatives. Rouhani rightly fears the council will prevent most moderates or reformists from participating. On August 19, Rouhani explained that after the nuclear sanctions are lifted, one of the government priorities is “holding transparent, accurate, and healthy elections.” He continued:

Just as the world looked at us respectfully after the result of the nuclear negotiations, we must hold elections that the world might respect and praise…No party, faction, or legal group must feel disappointed in our country…The Parliament in the future will not belong to one party or faction…the Guardian Council is an observer, not an executive…Supervision and execution must not be mixed up; we must pay attention to the Constitution and practice it completely.

Going directly after how the Guardian Council exercises its constitutional authority is a bold and risky move by Rouhani. The statement was unsurprisingly condemned by members of the Assembly of Experts, the Guardian Council, and the head of Iran’s judiciary branch Ayatollah Sadegh Amoli Larijani.

On September 9, Khamenei adjudicated this most recent spat between Rouhani and his detractors by praising the Guardian Council’s role in elections:

The Guardian Council’s oversight in the elections is approbatory and effective; this is their right, it is their legal right, it is their rational right; [however] some objections [to the Guardian Council’s rights] are gratuitous…Elections in Iran are in conformity with the international laws, being regarded as the safest and best elections in the world. Some ill-wishers inside the country, however, try to harm the sound elections and always talk about vote rigging and cast doubt about soundness of elections in the country.

More hits on Rouhani are probably coming. Khamenei has a long history of neutering the presidents serving under him by at least their second terms, lest they become too powerful. Khamenei will likely still let Rouhani have the nuclear deal, but the political “correction” against the president will undermine momentum for the Rouhani agenda.

Much is at stake, and both men have a very careful game to play. Achieving a nuclear agreement with the P5+1 is an unprecedented event in the Islamic Republic’s history, and it may unleash forces beyond Khamenei’s control. The Supreme Leader is also concerned about how the regime will survive after his passing (which may be soon). Rouhani, for his part, is a far more astute politician than his predecessors. He will anticipate this pushback from Khamenei and is likely already laying the groundwork to prevent what happened to Rafsanjani, Khatami, and Ahmadinejad from happening to him. This could get rough, but Rouhani may have time on his side.