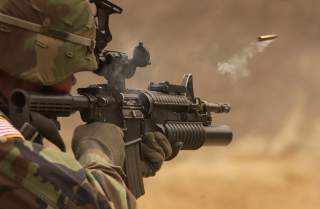 The service’s so-called M4 Product Improvement Program, or PIP, is a far-reaching initiative to upgrade the Army’s entire current inventory of M4 rifles into higher-tech, durable and more lethal M4A1 weapons, Army spokesman Pete Rowland, spokesman for PM Soldier Weapons, told Scout Warrior in an interview.
“The heavier barrel is more durable and has greater capacity to maintain accuracy and zero while withstanding the heat produced by high volumes of fire. New and upgraded M4A1s will also receive ambidextrous fire control,” an Army statement said.
To date, the Army has completed more than 117,000 M4A1 upgrades on the way to the eventual transformation of more than 480,000 M4 rifles. The service recently marked a milestone of having completed one-fourth of its intended upgrades to benefit Soldiers in combat.
"The Army is planning to convert all currently fielded M4 carbines to M4A1 carbines; approximately 483,000,” Rowland said. “Most of the enhancements resulted from Soldier surveys conducted over time.”
Rowland explained that the PIP involves a two-pronged effort; one part involves depot work to quickly transform existing M4s into M4A1s alongside a commensurate effort to acquire new M4A1 weapons from FN Herstal and Colt.
Army developers explain that conversions to the M4A1 represents the latest iteration in a long-standing service effort to improve the weapon.
“We continuously perform market research and maintain communications with the user for continuous improvements and to meet emerging requirements,” Army statements said.
The Army has already made more than 90 performance “Engineering Change Proposals” to the M4 Carbine since its introduction, an Army document describes.
“Improvements have been made to the trigger assembly, extractor spring, recoil buffer, barrel chamber, magazine and bolt, as well as ergonomic changes to allow Soldiers to tailor the system to meet their needs,” and Army statement said.
Today’s M4 is quite different “under the hood” than its predecessors and tomorrow’s M4A1 will be even further refined to provide Soldiers with an even more effective and reliable weapon system, Army statements said.
The M4A1 is also engineered to fire the emerging M885A1 Enhanced Performance Round, .556 ammunition designed with new, better penetrating and more lethal contours to exact more damage upon enemy targets.
“The M4A1 has improvements which take advantage of the M885A1. The round is better performing and is effective against light armor,” an Army official told Scout Warrior.
Prior to the emergence of the M4A1 program, the Army had planned to acquire a new M4; numerous tests, industry demonstrations and requirements development exercises informed this effort, including a “shoot off” among potential suppliers.

While Army officials are not yet discussing any additional improvements to the M1A4 or planning to launch a new program of any kind, service officials do acknowledge ongoing conceptual discussion regarding ways to further integrate emerging technology into the weapon.​

Within the last few years, the Army did conduct a “market survey” with which to explore a host of additional upgrades to the M4A1; These previous considerations, called the M4A1+ effort, analyzed by Army developers and then shelved. Among the options explored by the Army and industry included the use of a “flash suppressor,” camoflauge, removable iron sights and a single-stage trigger, according to numerous news reports and a formal government solicitation.
The M4A1+ effort was designed to look for add-on components that will "seamlessly integrate with the current M4A1 Carbine ... without negatively impacting or affecting the performance or operation of the M4A1 weapon," a FedBizOpps document states.
“One of the upgrades is an improved extended forward rail that will ‘provide for a hand guard allowing for a free-floated barrel’ for improved accuracy. The improved rail will also have to include a low-profile gas block that could spell the end of the M16/M4 design's traditional gas block and triangular fixed front sight,” the report says.