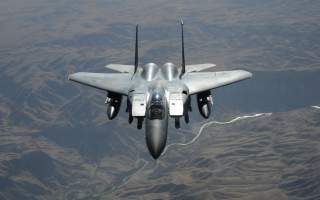 Confusion reigns over a recent series of U.S. airstrikes in Syria that allegedly killed several Russian mercenaries. While the American side seems to lack information, the Kremlin is dismissing the suggestion that Russian mercenaries were killed as “disinformation.” Given the confusion surrounding the issue, it is hard to say what the truth on the ground actually is.

From the American perspective, what happened on Feb. 7 is fairly simple. “For a quick recap, on the evening of February 7th, the coalition acted in self-defense where coalition advisers were present to support SDF [Syrian Democratic Forces] from a hostile force launching an unprovoked, coordinated attack across the Euphrates River against an established SDF position,” Lt. Gen. Jeff Harrigian, commander of U.S. Air Forces Central Command told reporters. “The hostile force initiated the attack by firing artillery and tank rounds at the SDF position, followed by a battalion-sized dismounted formation attempting to advance on partner forces under cover of supporting fires from artillery, tanks, and multiple-launch rocket systems and mortars.”

The American force’s response was to use airpower to defend itself and to contact the Russians via a deconfliction line. “At the start of this attack, coalition aircraft, including F-22s and MQ-9s, were overhead providing protective overwatch, defensive counter-air, and ISR support—as we have done daily throughout the defeat—the fight to defeat ISIS,” Harrigian said. “We immediately contacted the Russian officials on the deconfliction telephone line to alert them to the unprovoked attack on a known SDF and coalition position. After these calls, coalition officials approved strikes to destroy hostile forces.”

With help of ground controllers, American airpower did what it does best—obliterate enemy ground forces from the skies. “On the ground, Air Force joint terminal attack controllers embedded with the SDF called in precision strikes for more than three hours from aircraft and ground artillery, directing F-15Es, MQ-9s, B-52s, AC-130s and AH-64 Apaches to release multiple precision fire munitions and conduct strafing runs against the advancing aggressor force, stopping their advance and destroying multiple artillery pieces and tanks,” Harrigian said. “As the hostile forces turned west and retreated, we ceased fire.”

The Syrian offensive did not come as a surprise to the U.S. forces. “Despite the attack being unprovoked, it was not entirely unexpected,” Harrigian said. “The coalition observed a slow buildup of personnel and equipment the previous week, and we reminded Russian officials of the SDF and coalition presence via the telephone deconfliction line. This was well in advance of the enemy forces' attack.”

While the United States is still not exactly certain of the exact composition of the enemy force—Harrigian emphasized that American forces will retaliate in self-defense regardless. “We're going to do that first, defend ourselves appropriately,” Harrigian said. “And then as you highlight, we've got to work through exactly who it was to understand that. And, you know, at the point that we've got clarity on that, we'll let higher decide when that is in terms of those types of timelines.  But I think it's important to recognize that it's not as simple to sort out exactly who everybody is down there, and so we need to allow that to work its way through.”