Directed Energy Weapons: The Key to Securing America’s Dominance over Russia and China 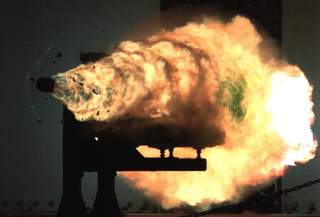 The United States is losing its long-held advantage in advanced sensors, computer-based battle management and precision weapons. These are the key technologies underpinning the so-called Second Offset Strategy which allowed the U.S. military to deter erstwhile adversaries such as the Soviet Union which had by the late 1970s achieved parity with the United States in nuclear weapons and maintained a clear numerical superiority in traditional conventional forces. Now Russia, China and their surrogates are deploying advanced precision weapons systems, both offensive and defensive, integrated with sophisticated sensors and automated battle management systems. The U.S. military needs to invest in new capabilities, in a Third Offset Strategy, to defeat prospective adversaries’ ability to match us in Second Offset technologies.

The leadership of the Department of Defense has identified a number of technologies that they assert are essential to this Third Offset Strategy. These include autonomous “deep learning” machines and systems; human-machine collaboration; assisted-human operations, or ways machines can make the human operate more effectively; and advanced human-machine teaming, where a human is working with an unmanned system and semi-autonomous weapons that are hardened to operate in an electronic warfare environment.

As envisioned, the Third Offset Strategy isn’t really new or different. It is the logical extension of the ongoing revolution in information technology and computing. Super smart computers, robots and autonomous weapons are not revolutionary. In fact, they are rather common place. That is why the automobile industry is investing heavily in self driving cars; the technologies involved are no longer cutting edge. The Department of Defense pioneered the really revolutionary work in these areas years ago through the efforts of the Defense Advanced Research Projects Agency, service research centers such as NRL and AFRL and independent research and development by defense companies.

In addition, there is no reason to believe that the United States has any special advantage in the areas of IT, autonomous decision making or robotics. Certainly not enough of a lead to make these capabilities the centerpiece of a long-term defense strategy which will take years, really decades, to reach fruition. The plain fact is that nations such as Russia and China have caught up or even surpassed this country in many areas associated with the so-called Second Offset Strategy. They are now well positioned to give us a run for our money with respect to the Third.

In a recent speech, Deputy Secretary of Defense Robert Work emphasized the need for speed in U.S. defensive systems in order to react more rapidly to the kind of threats he sees prospective high-end adversaries mounting against our military.  But he associated this speed with faster, smarter computers. “Against a cyber attack or an electronic warfare attack, or attacks against your space architecture, or missiles that are coming screaming in at you at Mach 6, you’re going to have to have a learning machine that helps you solve that problem right away… at the speed of light.”

The Secretary got it half right. Reaction times by defensive networks need to be faster, yes, and rely less on the reaction times of human beings. But it won’t matter much how fast our early warning and battle management systems are if the weapons and countermeasures they direct are not equally fast.  Simply put, a learning machine that operates at the speed of light requires weapons systems that do the same.

The U.S. military is on the threshold of a revolution in light speed weapons. Lasers, railguns, microwave devices and electronic warfare systems could fundamentally change high-end warfare. Lasers provide virtually instantaneous target engagement. Railguns, which accelerate a projectile to speeds of Mach 6 or better, are both fast and extremely lethal. Together lasers and railguns hold the potential for extremely deep magazines, very low cost per shot and the ability to defeat even massed salvoes of ballistic and cruise missiles, hypersonic weapons and surface-to-air and air-to-air missiles.

The Department of Defense has made significant progress over the past few years on both lasers and railguns. In 2014, the Navy conducted a successful field test of an integrated laser weapon aboard the USS Ponce in the Persian Gulf. Serious consideration is being given to deploying a laser weapon system on the Flight III variant of the Arleigh Burke destroyer. The Army has invested in a tactical laser that could be employed to defeat rockets, artillery, mortar rounds, drones and even low flying aircraft and helicopters. Extremely accurate targeting enables a very low-power laser (50-100KW) to successfully defeat these threats.  The Air Force is looking at placing laser weapons aboard fighter aircraft such as the F-35 Joint Strike Fighter and on the AC-130 gunship. Laser systems can serve as both highly effective sensors as well as speed of light weapons.

The railgun could be deployed soon on Navy surface combatants. The new Chief of Naval Operations made a clear and even impassioned declaration on the need for directed energy weapons now. According to the Daily Caller “I am impatient with respect to this directed energy … vector,” Navy Adm. John Richardson told CNN national security correspondent Jim Sciutto at a conference in Washington, D.C. “[The railgun] will be a magnificent weapon. I want to accelerate [it] as much as we can.”

Without question, DoD needs to do more in other parts of the directed energy battlespace, particularly electronic warfare and cyber. But overall, this is an area where the United States appears to have an advantage that could prove to be the core of a Third Offset Strategy.