On Display: China's Master Plan to Sink the U.S. Navy 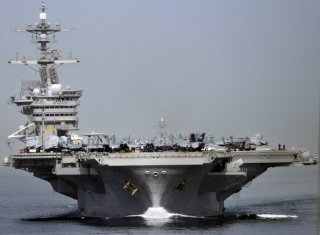 Look out, China military watchers. Beijing seems to have displayed some of its most impressive missile technology—technology that would be used to keep the U.S. Navy at bay in the event of a military conflict. And if all works out, we might just get an up-close look in the days to come.

According to a report in China’s Global Times, Beijing displayed some of its most deadly military hardware during a warm-up for its September 3rd World War II commemorations and parade.

Get your cameras and cell phones ready. Logic would suggest such weapons will be displayed in the actual celebrations.

According to various accounts, several types of missiles were paraded, among them some of the most lethal in China’s arsenal.

“The latest weaponry-the DF-26 intermediate-range ballistic missile that could reach a major U.S. base in Guam in the western Pacific, and the most potent missile, the DF-5 intercontinental ballistic missile, were seen in the rehearsal,” explained Shao Yongling, a senior colonel from the People's Liberation Army (PLA) Second Artillery Command College.

Of special note is the possible show in the days to come of China’s much-discussed “carrier-killer” missile, the DF-21D, a weapon at the heart of China’s anti-access/area-denial strategy.

“DF-21D anti-aircraft carrier ballistic missile that the U.S. believes is targeting it, also was seen for the first time, without concealing its model number.” Shao explained to the Global Times.

Getting an up-close and personal view of this important weapons system, described by many as being on the verge of a game changer, could tell us a little bit more about the system’s capabilities.

How the “Carrier-Killer” Works

How the DF-21D would work on the battlefield is key to understanding its possible potential.

The weapon is mobile, making its detection difficult—even under the best of circumstances. When fired, the missile is guided using advanced radar, satellites and possibly even an unmanned aerial vehicle. Various reports indicate it has a maneuverable warhead potentially capable of defeating missile-defense systems. It slams down on its target—an oceangoing vessel like an aircraft carrier—at speeds of Mach 10 to Mach 12. Most sources suggest the missile holds the ability to attack naval vessels up to approximately 1,000 miles away, outranging by many times the strike range of all U.S. aircraft aboard existing carriers.

Can America Defend Against It?

While there are many doubts as to whether the system is fully operational—the DF-21D has never been tested against a noncooperative sea-going target—it presents a tremendous challenge to U.S. maritime might in Asia once it becomes fully ready for military operations.

In an interview I conducted with Roger Cliff for The Diplomat back in 2012, China’s anti-ship weapon seemed to pose quite the challenge with no clear indications of what would happen in wartime:

“The thing to keep in mind is that, in order for China to successfully attack a U.S. navy ship with a ballistic missile, it must first detect the ship, identify it as a U.S. warship of a type that it wishes to attack (e.g., an aircraft carrier), acquire a precise enough measurement of its location that a missile can be launched at it (i.e., a one-hour old satellite photograph is probably useless, as the ship could be 25 miles away from where it was when the picture was taken), and then provide mid-course updates to the missile. Finally, the warhead must lock onto and home in on the ship.

This complicated ‘kill chain’ provides a number of opportunities to defeat the attack.  For example, over-the-horizon radars used to detect ships can be jammed, spoofed, or destroyed; smoke and other obscurants can be deployed when an imagery satellite, which follows a predictable orbit, is passing over a formation of ships; the mid-course updates can be jammed; and when the missile locks on to the target its seeker can be jammed or spoofed. Actually intercepting the missile is probably the most difficult thing to do. The SM-3 has an exoatmospheric kill vehicle, meaning that it can only intercept the missile during mid-course, when it’s traveling through space, so an Aegis ship escorting the target would have to fire its SM-3 almost immediately in order to intercept the missile before it reentered the atmosphere, or else there would have to be an Aegis ship positioned right under the flight path of the missile. The DF-21D may be equipped with decoys that are deployed in mid-course, making the SM-3’s job harder. U.S. Aegis ships are also equipped with the SM-2 Block 4 missile, which is capable of intercepting missiles within the atmosphere, but the DF-21D warhead will be performing some high-G maneuvers, which may make it impossible for the SM-2 Block 4 to successfully intercept it.

We can only hope we never have to find out.