Distributed Lethality and Beyond: The U.S. Navy's Surface Fleet Is Evolving Right Before Our Eyes 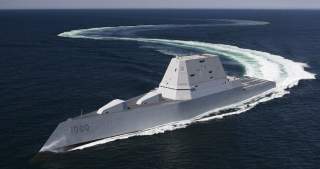 In many ways, the United States Navy of the 2030s will closely resemble today’s fleet. But while many of the ships, aircraft and submarines will be the same, those platforms will evolve over time. Moreover, the service will use those machines in entirely new ways.

“Clearly, the Navy that we’re going to have in the ‘30s is foundationally existing and it’s floating in the water today,” Vice Adm. Tom Rowden, commander, Naval Surface Forces, told The National Interest during an Oct. 25 interview. “But we have to continually look at the evolving threats and make sure when we lay down keels in the future, we have the capabilities and capacity built into those ships in order to be able to do that.”

One example Rowden pointed to is the Aegis combat system onboard the CG-47 Ticonderoga-class cruisers and DDG-51 Arleigh Burke-class destroyers. While originally intended as an area air-defense system to defend carrier strike groups from a Soviet onslaught, the Aegis has evolved into a potent ballistic-missile defense platform. “A testament to our engineers is the evolution of the Aegis weapons system, I don’t think that it was envisioned initially that we would utilize those—that weapon system—for ballistic missile defense,” Rowden said. “But it handles that job very very well right now.”

Indeed, the DDG-51 is continuing to evolve into an even more formidable warship. The Navy is starting to build Flight III DDG-51s—the first of which is budgeted for fiscal year 2016—which includes a host of upgrades. The most significant of those is the immensely capable Raytheon AN/SPY-6 Air and Missile Defense Radar (AMDR)—a Gallium Nitride-based active electronically scanned array (AESA) radar that is expected to be 30 times more powerful than the current SPY-1D(V).

Nonetheless, evolutionary upgrades have limits, ships cannot continue to be modified indefinitely. Eventually, designers run out space, weight, power and stability margins. As such, the Navy is starting to look at a possible future surface combatant that would replace the CG-47 Ticonderoga-class cruisers and DDG-51 Arleigh Burke-class destroyers. The service also recently commissioned the first of three DDG-1000 Zumwalt-class stealth destroyers, but while those ships might be a herald of future technologies, they are not representative of a next generation surface combatant.

“Clearly, we’re going to have to continue to evolve the ships that we have, but I think we will with an eye on the capabilities and capacities we’ll have to be building into the ships of the future,” Rowden said. “Once we can single up on that, then I think we can starting looking at what kind of a hull, and what kind of power, etc. is needed to be put into that ship.”

Right now, the Navy is simply working on trying to understand the kinds of capabilities that will be needed on future warships. “Where we are now is really making sure we fully understand the capabilities that need to be built into those ships in the future,” Rowden said. “What do we need in them from the perspective of command and control? Where do we see the threats going and how do we get after the weapons and weapons systems and capabilities we need in order to address those threats in the future? And how do we then go command and control that force?”

While Zumwalt and her two sisters are not going to be the future of the Navy, the three ships afford the service insight into some advanced technologies that might be useful onboard a next-generation warship. Particularly important is Zumwalt’s ability to generate immense amounts of electrical power—78MW—and its stealth in terms of radar cross-section, infrared and acoustics. The ship also has the capability to carry larger missiles and is more survivable due to its Raytheon Mk-57 peripheral vertical launch system. Moreover, the sheer size of the 15,500-ton Zumwalt might be useful to the Navy. “I think there is a lot of technologies that we’re going to leverage as we look at the capacity and the capabilities of the ships that we have to bring into the future,” Rowden said. “So I’m excited to get Zumwalt out and get her operating because I think we’re going to learn a heck of a lot from that ship as we go forward and design the ships of the future.”

One of the reasons Zumwalt’s power-generation capability is particularly important to the Navy is the possibility of installing directed energy weapons onboard a future surface combatant. Directed energy weapons could potentially invert the so-called salvo competition where offensive weapons are much cheaper than defensive interceptors.

“I think the advances we’re making in directed energy weapons—including lasers—is going to have a significant impact on our fleet of the future,” Rowden said. “One of the rules of thumb is defense costs more than offense. If you can get your ability to defend your ship, your aircraft, your asset—if you can start to reduce that price—the price of a laser shot that will defeat an incoming threat is significantly less than the price of an interceptor missile. Then you start to change the balance with respect to the investments potential adversaries have to make.”

In addition to directed energy weapons, Rowden said he sees the potential benefits of railgun technology for both defensive and offensive applications. “I’ve seen the work that we have done in developing our railguns, I certainly think it has capability,” Rowden said. “We have to look at what opportunity that technology presents in order to be able to execute not only the defensive mission but also the offensive capabilities as well.”

However, the challenge the Navy faces with directed energy weapons and railguns is not one of power generation, rather the problem is storing energy. “Your magazine almost becomes your ability to store power,” Rowden said. “However you generate that power—via fossil fuel, nuclear or whatever the case maybe—I think it’s a balance between the ability to generate it and the ability to store it. And there has been some pretty significant strides made in trying to reduce the size and weight of power storage.”

The Navy’s “A Design for Maintaining Maritime Superiority” outlines the service’s plans for its future fleet—a key component of which is “distributed lethality.” The concept—which Rowden developed at the Pentagon—calls for almost every Navy surface vessel to have a role in gaining and maintaining sea control.

“The Surface Force is supporting and aligned with the Navy's ‘A Design for Maintaining Maritime Superiority,’” the Navy said in a statement issued to The National Interest. “Consistent with this direction and the mandate to ‘Strengthen Naval Power at and From the Sea,’ Distributed Lethality’s core concept is that more lethal and distributed surface forces increase the offensive options available to fleet and joint commanders.  Equally important is the ability to enhance conventional deterrence postures that limit an adversary's option and even keep them at bay.”

But while the Distributed Lethality concept calls for almost every vessel to have a combat role—dispersing the Navy’s offensive firepower—that does not mean future warships will be smaller than current vessels. In fact, the opposite might be true.

“I think that quantity is a quality on its own, clearly I think that in building quantity, that drives you to look at smaller ships that can be produced faster by the industrial base,” Rowden said. “But I think to say that we would be able to go away from the capital ships that we are currently steaming—not only to project power but also to defend our power projection assets, whether its the amphibious readiness group or logistics train or carrier strike groups—I think we’re still going to need those capital ships in order to be able to execute the mission.”

Rowden said that unmanned warships are a possibility in addition to large next-generation surface combatants. “I think there is opportunity to not only continue to focus on them but also to look at things like unmanned and how we would go leverage that capability,” Rowden said. “I’m not sure it’s a size piece, I think it’s all sorta on the table. We’ve got to be thinking differently about how we get after this.”