Do China's Missiles in the South China Sea Mean War? 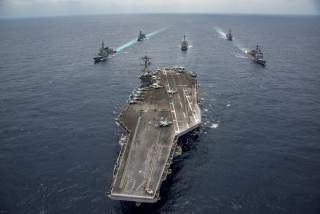 The South China Sea China has the potential to become a cauldron of conflict, and China is stoking the fire. By claiming perhaps as much as 90% of the South China Sea, Beijing is trampling on the rights of other nations in the region, nations whose Exclusion Economic Zones (EEZs) and national waters are being violated.

China first laid claim to the South China Sea through its Nine Dash Line in the early 1950s. And other than pathetic vocal protestations by other nations – including the US – nothing was done about it for years. Perhaps no one took the claim seriously at the time.

To be sure, the case went to the International Court in The Hague, which in 2016 ruled against China. Unfortunately, there is no enforcement mechanism to ensure compliance with that ruling.

Nonetheless, those who have been watching Beijing knew that it would not stop there. China soon started occupying various islets and partially submerged rocks within that Nine Dash Line. Not long after, China started improving those small pieces of land, dredging up sand and rock to buttress its artificially-created land.

Little by little progress was made, and ultimately China built runways on these man-made islets. Recently, Chinese cargo planes have brought military gear and associated logistical material to support full-time occupation. Though many seem to be taken aback by this development, missiles and their associated radars are logical additions to fighters in support of Beijing’s claims to the area.

Now a fait-accompli
Earlier this year, the nominee to be the next US Pacific Fleet Commander proclaimed that China now controls the South China Sea. He was not overstating the situation. The US and the rest of world – especially Brunei, Indonesia, Malaysia the Philippines and Vietnam, the nations most affected by this – have sat by and done nothing but complain.

Even though Washington and Australia have sailed warships in the general area, called Freedom of Navigation Operations (FONOPs), that action has been quite ineffective in stopping the Chinese.

Now it may be too late. It is almost impossible to imagine Beijing retreating from its newly created military outposts intended to defend its claim to nearly all of the South China Sea. Surface-to-air missiles (SAMs) and anti-ship/anti-cruise ballistic missiles (ACBMs), along with their necessary surveillance and fire-control radars, have been installed. The SAMs pose a threat to fighters and bombers and the ACBMs are intended to counter air or sea-launched cruise missiles. Attacking those islets is now a military challenge.

But China is also opening up another front in this issue – language designed to bolster its position. Last month, Beijing took major airlines and an American hospitality company to task for referring to Hong Kong, Macao, Taiwan and Tibet as “countries.” China insists these are Chinese territories and the world must refer to them as such.

This, of course, is unadulterated bullroar and nearly everyone recognizes that. Obviously, in another effort to gain support for its claim, Beijing is using the subterfuge of linguistics. If China can hornswoggle the rest of the world into using words of its choice in order to not offend the Middle Kingdom and thereby risk losing its large commercial market, so much the better.

Beijing, after a few years or decades – yes, they do think and plan that far into the future – would be able to say something to the effect that, “Look at how the entire world refers to these countries! Everyone has acknowledged that they are not countries at all; they are merely undisciplined territories of China.” China knows that names have power.

Beijing intends to do the same thing in the South China Sea. “See, we have been here for years and no one has seriously challenged us over this; these islets – and the waters around them – are clearly ours. So, stop with all that nonsense about the South China Sea – after all, it is even named after us.” As the old saying goes, possession is nine-tenths of the law.

Status quo or casus belli?
Pundits have made various comments regarding Beijing in the South China Sea, but none have addressed the elephant in the room. Inaction by Washington and others in the region has resulted in China controlling Sea Lines of Communication that handle one-third of the world’s maritime traffic.

No one has faced the ever more obvious fact that the only way to get Beijing to comply with the ruling by The Hague is by means of force. That would be a difficult effort to mount since China is a member of the UN Security Council. Any resolution authorizing an international expedition to evict China from its falsely-claimed islets would be doomed to failure.

That leaves the Quad – formally, the Quadrilateral Security Dialogue – of Australia, India, Japan and the United States to do the dirty work. But what to do? That raises a number of questions.

Why does the US – and now Australia – downplay their FONOPs in the area, claiming that they are only routine sailings? Is China’s defiance of international law only words or is Beijing psyched up for “bloody battles”? Are the US, the Quad and ASEAN nations willing to fight for the freedom of the South China Sea and the regional EEZs violated by Beijing? Are all so afraid of a military confrontation that they are willing to concede an entire sea to Beijing through inaction?

China’s flouting of international conventions and law by refusing to accept the ruling of The Hague and its bullying of others in the region have been serious enough provocations. However, by militarizing islets in the South China Sea, something that Beijing avowed in 2015 that it would not do, China has flung down the gauntlet, effectively issuing a call to arms. How – or will – the US and its allies answer?