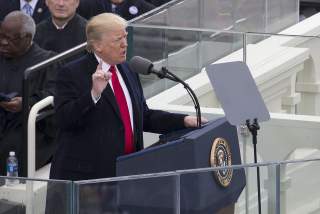 Trump nominated Judge Neil M. Gorsuch of the U.S. Court of Appeals for the 10th Circuit. With this nomination, Trump held to the promise he made on the campaign trail to select a nominee from a list of 21 individuals.

Gorsuch is an eminently qualified and well-respected judge with a record that demonstrates he cares about religious liberty, the separation of powers, and the original public meaning of the Constitution and the laws he interprets. He would be a fine successor to Scalia.

Now, the confirmation process begins for Gorsuch. It can be a harrowing process for a nominee and his family as senators, the media, and others dig into his past—particularly looking for scandals and juicy details that might derail the nomination.

Born in 1967, Gorsuch sits on the Denver-based 10th Circuit Court of Appeals, which has jurisdiction over Colorado, Kansas, New Mexico, Oklahoma, Utah, and Wyoming. He received his bachelor’s degree from Columbia University, his law degree from Harvard University, and his doctorate of philosophy from Oxford University.

But Gorsuch is not the only credentialed member of his family. His mother, Anne Gorsuch Burford, served as the first female head of the Environmental Protection Agency, under President Ronald Reagan.

After serving as a law clerk to Judge David Sentelle of the U.S. Court of Appeals for the D.C. Circuit and Justices Byron White and Anthony Kennedy of the U.S. Supreme Court, Gorsuch joined a prominent D.C. law firm, where he practiced for 10 years.

In May 2006, President George W. Bush nominated and the Senate confirmed Gorsuch to the 10th Circuit by a voice vote just two months later. His former boss, Kennedy, administered the oath of office.

Before joining the bench, Gorsuch authored “The Future of Assisted Suicide and Euthanasia” (2006), a book that, as Princeton University Press described it, “builds a nuanced, novel, and powerful moral and legal argument against legalization [of assisted suicide and euthanasia], one based on a principle that, surprisingly, has largely been overlooked in the debate—the idea that human life is intrinsically valuable and that intentional killing is always wrong.”

After joining the bench, he co-authored “The Law of Judicial Precedent” (2016) with the highly-respected legal writer Bryan Garner (who co-authored several books with Scalia) and 11 other federal appellate judges.

Gorsuch has also critiqued the left’s increasing preference to resort to the courts instead of the political process to advance its policy goals. In a 2005 op-ed, he wrote:

American liberals have become addicted to the courtroom, relying on judges and lawyers rather than elected leaders and the ballot box, as the primary means of effecting their social agenda on everything from gay marriage to assisted suicide to the use of vouchers for private-school education. This overweening addiction to the courtroom as the place to debate social policy is bad for the country and bad for the judiciary … As a society, we lose the benefit of the give-and-take of the political process and the flexibility of social experimentation that only the elected branches can provide.

Gorsuch has criticized the judicial confirmation process and decried treating would-be judges as “little more than politicians with robes.”

During the campaign, Trump pledged to nominate an individual who was “very much in the mold of” Scalia.

One recent study singled out Gorsuch as one of the top judges whose approach to interpreting the law was closest to that of Scalia’s approach. Gorsuch ranked second out of 15 judges in “Scalia-ness,” surpassed only by Utah Supreme Court Justice Thomas Lee.

When it comes to interpreting statutes and the Constitution, a Supreme Court justice must keep uppermost in mind that he did not write the text and should not attempt to rewrite that text through creative “interpretation” to mean something quite different from what was intended by its drafters, but which the justice personally considers more fair, wise, or just.

In other words, a justice should interpret the text and structure of a statute, or the Constitution, based on the original public meaning of that text at the time it was adopted, and should not, under the guise of statutory or constitutional interpretation, impose on the rest of society his own policy preferences based on his perceptions of contemporary values.

Gorsuch gives every indication that he will be just such a justice if he is confirmed by the Senate. He has demonstrated that he understands the proper, limited scope of the judicial power.

During his 10th Circuit confirmation hearing he stated, “The independence of the judiciary depends upon people in both parties being willing to serve, good people being willing to serve who are capable and willing to put aside their personal politics and preferences to decide cases and to follow the law and not try and make it.”

He has since written,

… donning a robe doesn’t make me any smarter. But the robe does mean something … It serves as a reminder of what’s expected of us—what [Edmund] Burke called the ‘cold neutrality of an impartial judge.’ It serves, too, as a reminder of the relatively modest station we’re meant to occupy in a democratic society. In other places, judges wear scarlet and ermine. Here, we’re told to buy our own plain black robes.

In a concurring opinion in 2016, Gorsuch wrote that the Constitution “isn’t some inkblot on which litigants may project their hopes and dreams … but a carefully drafted text judges are charged with applying according to its original public meaning.”

Gorsuch leaves his personal views at home. During his confirmation hearing, Sen. Lindsey Graham, R-S.C., questioned Gorsuch about how his views on assisted suicide and euthanasia would affect his judging.

Each case, Gorsuch said, deserves the “complete attention of the judge without being diverted by personal politics, policy preferences, or what you ate for breakfast.” He later added that he would “follow the law as written and not replace it with [his] own preferences, or anyone else’s.”

In a tribute to Scalia, Gorsuch wrote that “legislators may appeal to their own moral convictions and to claims about social utility to reshape the law as they think it should be in the future,” but that “judges should instead strive (if humanly and so imperfectly) to apply the law as it is, focusing backward, not forward, and looking to text, structure, and history to decide what a reasonable reader at the time of the events in question would have understood the law to be—not to decide cases based on their own moral convictions or the policy consequences they believe might serve society best.”

If you’re going to be a good and faithful judge, you have to resign yourself to the fact that you’re not always going to like the conclusions you reach. If you like them all the time, you’re probably doing something wrong.

He also wrote that he was “an adherent to the view that outcomes (ends) do not justify methods (means).”

Gorsuch has written several notable opinions, some of which are described below, that are likely to be scrutinized during his confirmation hearing.

Courts will typically defer to an administrative agency’s interpretation of an ambiguous statute if that interpretation is reasonable. Known as “Chevron deference,” this practice is controversial and often criticized by conservatives.

In 2016, Gorsuch authored a separate concurring opinion, explicitly calling Chevron deference into question. He wrote, “ … the fact is Chevron … permit[s] executive bureaucracies to swallow huge amounts of core judicial and legislative power and concentrate federal power in a way that seems more than a little difficult to square with the Constitution of the framers’ design.”

He added, “[m]aybe the time has come to face the behemoth.”

When an AOL filter identified what appeared to be child pornography in Walter Ackerman’s email, it forwarded the email to the National Center for Missing and Exploited Children (NCMEC) (a quasi-governmental body), which then completed an investigation and notified the police.

After being indicted by a federal grand jury for possessing and distributing child pornography, Ackerman filed suit, claiming NCMEC violated the Fourth Amendment when it searched his emails without a warrant.

Writing for the majority, Gorsuch determined that the Fourth Amendment applied to NCMEC since its “law enforcement powers extend well beyond those enjoyed by private citizens” and that NCMEC conducted a “search” within the meaning of the Fourth Amendment. The case was remanded for the district court to determine whether the search was nevertheless reasonable.

In this 2016 case, the 10th Circuit held that police did not violate Ralph Carloss’ Fourth Amendment right to be free from unreasonable search and seizure when they walked onto his property to knock on the front door, even though there were four plainly visible “No Trespassing” signs.