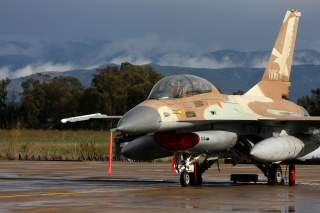 Israel’s nuclear weapons program is one of the biggest military open secrets in the world. Now we know a little more about the angst inside the Pentagon in the late 1960s, as Israel was months away from activating its nuclear deterrent.

That’s all according to new documents obtained by the nonprofit National Security Archive at George Washington University. In 2006, the researchers revealed the Nixon administration’s wrangling over what to do about Israel’s nuclear weapons program. But the latest round of documents show new details about the debate—and the stark warnings from Pentagon officials about the dangers of Israeli nukes.

One of the more severe warnings came from then-Deputy Secretary of Defense David Packard. On July 14, 1969, Packard sent a memo to Melvin Laird—the secretary of defense—laying down what to discuss with the president. The memo reflected a “general consensus” among Pentagon officials and Secretary of State Henry Kissinger that Israel’s weapons program would destabilize the region.

Israel remains highly secretive about its nuclear weapons—which are believed to number in the several hundreds. In the late 1960s, the secretive nature of the program led to lots of uncertainty in Washington about how far Israel had made it, and whether other Middle Eastern states knew about the program.

The officials recommended seeking an agreement with Israel not to deploy Jericho I ballistic missiles—which could plausibly be used for non-nuclear weapons, but were too impractical and expensive to build unless Israel intended to build nukes.

The memo also recommended delaying the delivery of F-4 Phantom fighters to the Israel air force—the “lean” option to convince Israel to back off. But the U.S. was also in another dilemma. The Pentagon was also concerned the Israelis didn’t have the training to properly maintain the fighters if Washington delivered them.

That meant in the case of a war, the U.S. would have to rush technicians to Israel to keep its American-supplied fighters in the air—“the worst possible political time for us to do so,” the memo stated. But if the U.S. delayed delivery for too long, reporters might find out and start asking uncomfortable questions about the reasons.

In another memo, Paul Warnke—the assistant secretary of defense for international security affairs—described Israel’s weapons program as constituting “the single most dangerous phenomenon in an area dangerous enough without nuclear weapons.”

But Warnke was skeptical that cancelling the fighter deal would make much progress. Israel was only a few months away from finishing a nuclear weapon, and “would be unable and unwilling to put the genie back in the bottle.”

Ultimately, Nixon didn’t cancel the fighter deal, and Israel went ahead and built the undeclared nuclear arsenal that exists today. The National Security Archives notes that the exact reasons why Nixon did not follow the advice of his Pentagon advisers is unclear. If documents exist showing why, the government hasn’t released them.

It could be because of influence from the State Department, whose officials feared that public knowledge of Israeli nukes would scuttle peace negotiations. The diplomats favored a softer line and a “graduated approach” that would “begin with essentially persuasive tactics,” one State Department memo explained.

There were also worried how the Soviet Union would react. If the open-secret became totally open, the State Department feared the Arab states would demand the Soviet Union supply them with nuclear material. That’s something Moscow would have been reluctant to oblige, but it may have been forced to do it anyways.

The Soviet Union put high priority on maintaining good relations with its Middle East allies. A cold—but preferable—option would be to publicly pretend Israel’s weapons program didn’t exist. And that’s what it appeared the U.S. did.

But what’s perhaps most interesting is the blunt and caustic attitudes from the Americans.

“Israel wants nuclear weapons, as was both explicit and implicit in our conversations with [Israeli ambassador to the U.S. Yitzhak] Rabin, for two reasons: first, to deter the Arabs from striking Israel, and second, if deterrence fails and Israel were about to be overrun, to destroy the Arabs in a nuclear Armageddon,” the State Department memo noted.

But as the memo also stated, it’s not possible to deter an irregular adversary, which Israel’s enemies were fast becoming. Aside from provoking Israel’s rivals from developing nuclear weapons on their own—nuclear programs would later proceed to various degrees in Syria, Iraq and Iran—it would provoke a shift from conventional to unconventional warfare Israel would be hard-pressed to deter over the long term.