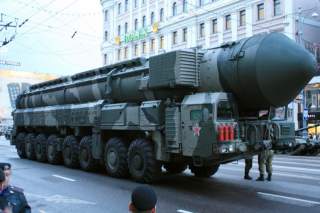 This week’s Republican National Convention has reminded me again that knowing your nuclear triad is important. Some of the malcontentedness after last month’s Brexit referendum is a reminder that the Scottish Nationalists don’t like nuclear weapons, triad or not. Earlier this month, Congressman Adam Smith, ranking member of the House Armed Service Committee, wants new thinking on nuclear weapons, including “downsizing” its ambitions for recapitalization. One almost wholly new thought would be getting the land-based missiles on the road, to increase their deterrent effect and defensibility, while decreasing the cost of replacing the whole force.

Lest start with the bombers and their cruise missiles. For Breaking Defense, Constance Baroudos and Peter Huessy wrote recently on why they believe that a new, stealthy, nuclear-armed cruise missile is “crucial to nuclear deterrence.” I’m less convinced about the importance of this Long Range Stand-Off (LRSO) weapon, which is so far supported in the Congress. One of the problems with air-breathing bombers, at least in the US Air Force, is that they’re generally concentrated on just five fixed bases. An alternative is dispersing long-range aircraft with long-range missiles onto many bases—with concomitantly higher logistics costs—for far greater survivability on the ground. The USAF doesn’t do that, at least not yet.

There’s a similar problem with the submarine-based missiles. At sea, the entire fleet represents just fourteen aim-points, but those are extremely hard to find and target. For the United States or the United Kingdom (or France for that matter), the ships in port are but one or two aim-points. If Nicola Sturgeon has her way, the UK may need to move that aim-point to Devonshire or Cornwall. Russia and China have similar problems. This is perhaps the real reason that the Chinese government fulminates so much about ridiculous claims to the South China Sea: Beijing may want to build a defensible undersea bastion there for ballistic missile submarines.

Land-based missiles can’t scramble from silos, and launch-on-warning is a problematic tactic. They’re pretty much only useful against the Russians, as their flight paths all head that way, and such a flaming overflight of Russian territory would be rather, er, destabilizing. As Baroudos and Huessy note, at least those missiles are dispersed and ready to fly. Thus, destroying the 400 Minuteman III of the USAF’s operational force would necessitate lighting the Great Plains afire. Any US leader would be more than a little annoyed, and could respond with those submarines sharply. As they’re treaty-limited to single warheads, they’re not tempting targets: destroying a missile on the ground requires expending a nuclear missile. But all the same, someone might just be stupid enough to try.

Babysitting those stationary missiles can be boring duty, and the recent cheating scandal amongst test-taking missile squadron officers is a reminder of how morale can flag. As one National Guard general suggested to me, part of the problem may have been that the missile force hasn’t had a stable home. Since the end of the Cold War, the missileers have been part of Strategic Air Command, Air Combat Command, Space Command, and now Global Strike Command—which is basically SAC all over again. In the long run, I wouldn’t mind seeing them in a separate Space Force, after separation from the USAF. That could eventually bring better performance, if after another round of turmoil.

Less boring, certainly, would be duty with mobile missile units, as the Russians have. Road- and rail-mobile intercontinental missiles are almost much, much less expensive versions of ballistic missile submarines. They’re also not a tempting target for a nuclear attack, if they only have one warhead per launcher, and their locations are frequently changing. Maybe, the USAF thought, the replacement for the Minuteman III could be mobile, and may have been talking to industry about a mobile option—or not. The technical challenges are surmountable, as even the North Koreans may be clever enough to figure this out. The Congress has so far been unamused, perhaps because getting the missiles on the road threatens the livelihood of the little prairie towns that serve breakfast to relief crews.

The UK lacks the real estate for that strategy. Those USAF cruise missiles penned into RAF Greenham Common attracted unwanted domestic attention. We’re waiting for the complaints about any future need to move the submarines. But the US, like Russia, may have the room. The US is home to the five largest military bases in the world, and many more which could house a handful of missile launchers alongside whatever else they’re doing. As Michael Horowitz of the University of Pennsylvania noted in The Diffusion of Military Power, running a nuclear missile force doesn’t require much interaction with the rest of any country’s military. There are plenty of domestic political challenges to overcome in this two-level game, but the mobile missile—demonstrated elsewhere—is an idea so crazy it might just work.