Does China Really Pose a Threat to Taiwan? 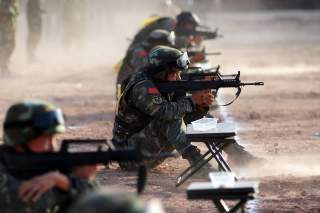 A colleague of mine loves to point out that I am constantly saying, “Back in the Nineties…” In other words, I am always commenting on current events by referencing incidents and aftereffects that took place more than 20 years ago.

I guess that is just the occupational hazard of growing older. On the other hand, memory and experience help to put modern happenings into perspective. And lately, we seem to be revisiting an Asian security problem that many probably thought was long dead and buried: a Chinese invasion of Taiwan.

Sorry, I can’t help it, but…back in the Nineties, the Chinese threat to Taiwan was perhaps the paramount security concern in East Asia. A war between China and Taiwan was considered to be the most likely military clash at that time, and it was the basis for most anxieties when it came to regional peace and stability. Consequently, tensions across the Taiwan Straits were the source of most of the strains between Washington and Beijing at the time.

And then, much of this concern disappeared. In part, because Beijing and Taipei have gradually moved closer to each other, politically, economically and culturally. Twenty-five years ago, one couldn’t mail a letter directly from Taiwan to China; today, there are nonstop flights between Taiwan and the mainland.

More importantly, perhaps, other regional security concerns have pushed the Taiwan Straits issue out of the limelight. North Korea’s nuclear weapons program and territorial spats in the East and South China Seas have pushed the China-Taiwan issue to the backburner.

In particular, China’s rising great-power ambitions – paired with its growing military strength – is today more felt elsewhere and by more nations. China’s assertiveness in the South China Sea, as marked by its aggressive (and illegal) island-building program and its growing presence in the Indian Ocean region (bolstered by its “One Belt, One Road” initiative), has made the country a much broader challenge to the security status quo in the Indo-Pacific. China-Taiwan tensions seem almost quaint in comparison.

What a difference a day (or two decades) makes

Now, concerns over a potential cross-straits conflict may be roaring back. Ian Easton, a researcher at the Project 2049 Institute (a think-tank in Washington DC that studies Asian security and development), has written a new book, The Chinese Invasion Threat. In this book, he argues that China has never abandoned its plans for attacking Taiwan, should it feel this necessary to achieving eventual “reunification” with the mainland. In particular, Easton was able to acquire and translate leaked Chinese classified papers (such as internally restricted, or neibu documents) and piece together Beijing plans for an invasion of Taiwan.

Easton’s scenario for invasion? Actually, it is very close to one that I speculated about in a report I coauthored 20 years ago, back when I was working for the Center for Strategic and Budgetary Assessments. Basically, China would likely begin with a naval and air blockade of Taiwan, followed up by missile strikes on key island infrastructures, including airfields, ports, command and control centers, etc. (for this reason, China has stationed up to 1,500 short- and medium-range ballistic missiles in Fujian province, directly across the straits from Taiwan). A new wrinkle on the 1990s-era invasion scenario entails the use nontraditional attacks, such cyber-strikes and electronic warfare designed to take out Taiwan’s computer, early-warning, and communications networks, as well as psychological warfare conducted against the Taiwanese people.

China might also decide to occupy the Kinmen and Matsu islands, which lie only kilometers from the mainland. Lastly, China might attempt a full-scale amphibious and air invasion of the island of Taiwan itself. Such an invasion, as Easton points out, would be highly risky. It could involve up to a million soldiers and would take weeks, if not months, to plan, giving away the element of surprise. Taiwanese airbases would be particularly hard to neutralize, as some are built right into the sides of mountains.

But Easton also notes that should a mainland invasion and occupation of Taiwan be successful, it would be devastating to the current regional security balance. The United States would lose a democratic state and a valuable outpost in the far western Pacific. Taiwan is a major source of signals intelligence, which is shared with Washington, and US forces would likely use the island as a forward operating base in extreme situations.

The impact on the rest of East Asia would be just as severe, particularly for Japan. An article published on the website Slate cites a line that Easton found in a restricted Chinese report: “As soon as Taiwan is reunified with mainland China, Japan’s maritime lines of communication will fall completely within the striking range of China’s fighters and bombers.” Additionally, Chinese access to airbases and naval facilities on Taiwan would shore up Beijing’s ability to tighten its hold over the South China Sea.

Everything old is new again

Of course, most experts, including Easton, do not believe China will be invading Taiwan anytime soon. The risks are huge, and the consequences of failure would be devastating should China be unable to achieve its goals. Nevertheless, Easton’s book shows that cross-straits relations remain tenuous and that war is not a shelved option. Easton’s solution, in part, is for the United States to step up its arms sales to Taiwan and to remind Beijing of its enduring commitment to a peaceful resolution of the China-Taiwan situation.

Again, these are not new arguments, and it is a tad sad – and perhaps ironic – that they must be restated here in the second decade of the 21st century. Dean Acheson, the late US president Harry Truman’s secretary of state, once said that “foreign policy is one damn thing after another.” Decades later, another secretary of state, George Shultz, supposedly upon hearing this statement, responded by saying, “No, it’s the same damn thing after another.”