Does China's Navy Really Have a Railgun? (Or Is It a Hoax?) 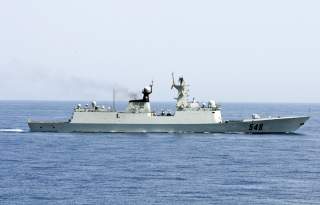 In late January 2018, photos started circulating on social media showing a Chinese landing ship armed with a large gun turret fitted on its bow where the ship’s anti-aircraft turret would normally be. If confirmed to be a working prototype, China would be the first in the world to have a warship carrying an electromagnetic railgun (EMRG)—a new type of armament capable of posing a severe threat to U.S. forward-deployed forces. Despite sinking over $500 million into research and development, the U.S. Navy has thus far been unable to successfully produce the weapon. The absence of any information on the design and the testing of the railgun prototype from Chinese authorities, however, casts doubt on whether the People’s Liberation Army Navy’s (PLAN) prototype even works.

The development of rail guns and other directed-energy weapons are the future of maritime superiority. So, should the U.S. military be concerned about the Chinese ships with next-generation weapons? Until we see a fully operational Chinese railgun launch a projectile using electromagnetic energy, the answer is “no.”

An EMRG is a type of weapon that uses magnetic fields generated by enormous amounts of energy, rather than explosives, to fire warheads. The electricity launches an inert projectile up to 4,500 miles per hour (about Mach 8)—a velocity that would vaporize targets instantly through kinetic energy alone.

This Chinese development seems purposefully timed, as budget constraints recently compelled the U.S. Navy to reduce its EMRG program development. The United States has a long history and interest in these types of kinetic energy weapons, starting from the Reagan-era Strategic Defense Initiative (SDI) in the 1980s. America launched a prototype in 2005 and consequently awarded two contracts to BAE Systems and General Atomics to build an EMRG. Both companies delivered their working prototypes in 2012, but the United States has not yet been successful in fitting a working EMRG onto a warship.

The Chinese have also been investing in electromagnetic weapons research since the 1980s, but they have only recently indicated significant progress. The PLA Naval University of Engineering asserts that China is capable of deploying railguns on its ships thanks to an integrated electric propulsion system (IEPS), a state-of-the-art technology on naval vessels that which is integral to powering an EMRG. Rear Admiral Ma Weiming, one of China’s top experts on electromagnetic technology, announced for the first time in October 2017 that the Chinese military had a confirmed railgun program. More recently in March 2018, a PLA-run news source confirmed that sea tests of China’s EMRG are underway at the annual National People’s Congress in Beijing.

Beijing has been investing in new high-tech weapons to change the maritime balance of power in the Asia-Pacific, where the United States currently has a strong forward presence. An EMRG would be a game changer in defending the PLAN’s surface ships against missiles, and greatly increases the survivability of the fleet. This electromagnetic technology would also assist the PLAN in sea control and amphibious operations—important considerations for Beijing as it tries to enforce its vast maritime territorial claims in the East China Sea and South China Sea.

If Beijing successfully develops what experts say could be a working rail gun, then China would have accomplished something the United States has been working on for more than a decade and has not yet achieved. But based on the current evidence, this is implausible for three reasons.

First, there is no proof that the Chinese have figured out the technology for an operational rail gun on land, let alone the sea. China’s EMRG program is extremely young, and apart from vague proclamations from military officials that they have the ability to deploy such a weapon, we have not seen any proof of technical progress.

Second, a photo of a weapon mounted on an old Chinese warship cannot prove its capability. The photo could have easily been staged and spread on social media to raise a buzz in both Chinese and U.S. security communities.

Third, it is likely that the Chinese could be posturing to drum up nationalism and show that they are indeed technically proficient enough to challenge the U.S. Navy in the Asia-Pacific region. As China grows more aggressive in the region and makes bold claims on territory, a public proclamation of the possession of a breakthrough weapon could be their way of showing force.

The United States maintains maritime superiority in the Asia-Pacific, both technologically and strategically. It is, however, worth keeping an eye on China’s rapidly modernizing forces and dedication to deploying next-generation weaponry and electromagnetic technology. As of now, the Chinese simply aren't there yet.

Melodie Ha is a researcher with the Asia Pacific Security Program at the Center for a New American Security (CNAS).