Does France Have Enough Bombs to Smash ISIS? 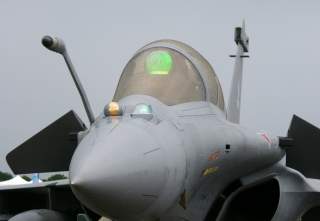 The Armée de l'air will carry much of the burden as France goes to war with the Daesh terrorist group in Syria and Iraq following Friday’s attack on Paris.

In many ways, the Armée de l'air—the French air force—is probably the most capable air arm in Europe. Only the British Royal Air Force comes close to matching the overall capabilities of the Ad’A. It maintains a robust force of indigenous combat aircraft including the Dassault Rafafe and several versions of the Mirage 2000—including a variant dedicated to nuclear strike. Perhaps more importantly, the Ad’A also maintains a fleet of tankers, AWACS, various intelligence surveillance and reconnaissance (ISR) platforms and strategic airlifters. Thus it is a full service air force that is capable of autonomous operations.

Indeed, autonomy lies at the heart of French military strategy with Paris’ nuclear forces always taking first priority. “Preservation of our strategic autonomy, which guarantees freedom of decision and action, is the first principle of our strategy,” reads the French government’s 2013 white paper on defense. “This strategic autonomy must allow France to take the initiative in operations that it may deem necessary to preserve its security interests.”

As such, the French air force places a very high priority on its nuclear forces, one senior U.S. Air Force officer who has flown with French told me. The French air force relies on a combination of tankers, excellent command and control links and stand-off nuclear weapons for that mission. In fact, the French forces flying the two-seat Mirage 2000N dedicated nuclear strike version of that venerable jet routinely practice for that role flying out Djibouti, but without the actual nuclear warhead. The key to French airborne nuclear deterrence is the Mach 3.0 capable Air-Sol Moyenne Portée missile with its TN-81 300KT warhead. “Their nuclear capability is the best part their power projection,” said the U.S. Air Force office.  “They have a fantastic stand-off nuclear missile.”

There is also a dedicated two-seat Mirage 2000D strike version of the jet that flies conventional strike missions. France has roughly 61 of the Mirage 2000D bomber variants according to a French defense ministry document . The French air force also flies forty multirole versions of the Mirage 2000, according to the document. The jet can be armed with a host of laser and GPS-guided bombs as well as stand-off missiles.

But the most capable jet in the French air force inventory is the Dassault Rafale multirole fighter. The aircraft is very capable; it has good avionics and sensors. Particularly, the jet’s SPECTRA electronic warfare suite is excellent—which theoretically allows the Rafale to performance strike missions without the help of a jamming platform like the U.S. Navy EA-18G Growler. The Rafale was originally fitted with a RBE2 passive scanned array radar, but a new active array set is slowly being retrofitted. The service currently has about 91 jets in service.

Moreover, during the Libya campaign, many U.S. Air Force aviators from the F-15E Strike Eagle community in particular were not very impressed with the accuracy of the French air strikes. But then the Thales Damocles targeting pods are known to have less than stellar performance compared to the latest generation of pods. France is currently developing a new pod called the TALIOS, but that system has yet to be fielded.

But there is the question if France has enough of the current Damocles pod in its inventory—certainly it didn’t in 2011. “They had to do a lot of buddy lasing with their old Mirages,” recalled the U.S. Air Force official. Specifically, Mirages were paired with Rafales—which is similar to how the French operated during their recent strikes against Raqqah. But the Air Force official noted that the French only dropped twenty bombs—or two per aircraft during Sunday’s sorties. “Twenty bombs isn't a whole lot.”

Overall, the French have very good capabilities, but they need to invest more on sensor pods and their inventory of weapons. France has always had good technical know how, but it needs to field those capabilities in sufficient quantity. The problem is that nationally produced hardware tends to be expensive—the Rafale, for example, is an expensive jet.

Nonetheless, the Armee de l’Air is a very capable force that should be able to pulverize Daesh—assuming it has enough bombs on hand.