Does NATO Missile Defense Have a Future? 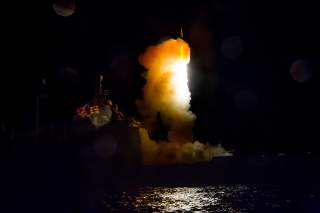 On 18 November, Vladimir Putin issued a warning that Russia considered missile defense and Prompt Global Strike as threats to its security, and would work hard to neutralise them. Viktor Ozerov, Chairman of the Federation Council’s Defense and Security Committee, went further in an interview with the RIA Novosti Russian news agency on Nov. 21, warning of Russian efforts to improve its offensive capabilities to deal with NATO’s missile defense installations.  Ozerov specifically mentioned air-to-surface missiles capable of penetrating US air defenses in Europe.  In the meantime, the Russian military has placed Bastion missile launchers in Kaliningrad, the exclave bordering NATO members Poland and Lithuania. This could threaten the prospective NATO missile defense site in Poland.

Remarkably, with all the controversy surrounding Trump’s remarks on NATO and the Baltic States during the presidential election campaign, barely a word was heard about the missile defense system. This is surprising for a number of reasons: President-elect Trump has spoken on numerous occasions about improving the relationship between the US and Putin’s Russia. Putin has consistently blamed NATO’s missile defense deployments in Europe as one of the factors behind the deterioration in relations. In May, the United States activated a missile defense shield in Romania with plans in place to deploy interceptors in Poland by 2018.  The Obama administration’s European Phased Adaptive Approach (EPAA) missile defense program has arguably helped to strengthen the relationship between the US and vulnerable Eastern European countries neighboring Russia.

The strong disagreements between Washington and Moscow over missile defense are part and parcel of the more extensive mistrust between the two parties, linked in part to Russia’s anger and bitterness over the legacy of NATO’s expansion eastwards following the fall of the Soviet empire. NATO members such as Poland and the Baltic States are enthusiastic supporters of the anti-missile shield not because they believe it will protect them from Russian warheads, but because of the associated political and military support provided by the United States in maintaining the radars and interceptors deployed in this region.  Thus, NATO’s missile defense deployments may be more a reflection of the tensions between NATO and Russia than a direct cause of these difficulties.

In an interview with the New York Times on July 21, Trump remarked that he wouldn’t automatically give support to vulnerable members of NATO in the event of a Russian attack.  This suggests that the United States under Trump might decline to risk its involvement in a war with Russia to protect distant allies if there is little at stake for the American people.  This potentially raises serious questions about the future of the NATO missile defense system and is consistent with Trump’s isolationist outlook and his apparent hostility to US engagements overseas.

On the other hand, some NATO member states may be encouraged by Trump’s rhetoric on the need for US allies to pay more towards their own security. Over the last two years, the United States has stepped up its efforts to persuade NATO members to increase their defense spending to two per cent of their GDP in line with the threshold stipulated by the Alliance. Trump’s rhetoric may yet prod recalcitrant member states into stumping up the money.

It is hard to believe now, but two years ago, Mitt Romney, John McCain, and other leading Republicans were arguing that Russia’s annexation of the Crimean peninsula was a direct result of President Obama’s naivety towards Moscow. They attacked Obama for scrapping the anti-missile system of George W. Bush but overlooked the fact that he unveiled his own system, which was arguably a more mobile, flexible, and comprehensive response for NATO to the spread of ballistic missiles and weapons of mass destruction outside the Euro-Atlantic area. The Republicans have now seemingly gone silent on NATO missile defense.

In the years following the end of the Cold War, successive US Administrations viewed missile defense as an asset to address the dual threats of weapons of mass destruction and ballistic missiles from revisionist regimes such as Iran and North Korea. US officials have gone out of their way to try and convince Russia that the NATO missile defense system is directed at Teheran and not at Moscow. Putin has never bought this argument. Moscow has always argued that it threatens Russia’s strategic deterrent.

There are several reasons for this. Firstly, Kremlin officials are inherently cautious and suspicious and will tend to discount the laws of physics, which would rule out the creation of defenses efficient enough to seriously threaten a Russian retaliatory strike potential. They also fear an unexpected technological breakthrough, which could somehow make missile defenses more effective.  Moreover, a US conventional Prompt Global Strike, could hypothetically provide the potential for a disarming first strike against Moscow with a downgraded Russian retaliatory strike potential successfully neutralized by  improved missile defenses.  This is the Kremlin’s nightmare which explains Russia’s aggressive opposition to  NATO’s missile defense.

Second, it is not the anti-missile shield’s real capabilities that are significant for Moscow, but rather how these capabilities are perceived by Europeans and the rest of the world.  The Kremlin fears that Russia’s strategic power could be downgraded if there is a widespread perception that missile defenses can nullify its nuclear missiles. Since the power to intimidate is a trump card in the Kremlin’s foreign policy toolbox, such a perception could expose Moscow as a paper tiger. This is why it is likely that Putin will repeat his call for the cancelation of NATO missile defense plans in his future discussions with the Trump administration.

Trump evidently favors a transactional approach in policy, though, which is why he might at least try to get something in return for pacifying Putin. The Russian leader, in turn, may seek to expand his sphere of influence, both geographically and psychologically, and may not be inclined to make concessions.  While the cancelation of NATO’s missile defense deployments is far from certain after Trump moves into the White House, states such as Poland, Estonia, Latvia and Lithuania will unquestionably be concerned that this could become a possibility and will view such a decision as a dangerous act of appeasement that will embolden Russia.  Furthermore, such a move will have disturbing ramifications for the future cohesion of the Alliance.  The world watches and waits.

Dr. Azriel Bermant is a lecturer in International Relations at Tel Aviv University. His book, Margaret Thatcher and the Middle East was published by Cambridge University Press in October. Twitter: @azrielb Website: azrielbermant.com