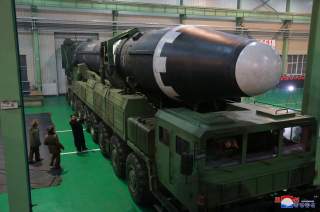 While there is some dispute about the exact capabilities of the HS-15, it appears that the missile is so large—and indeed North Korean statements explicitly state the weapon is designed to carry a “super heavy” warhead—that it might irrelevant if Pyongyang possesses warhead miniaturization technology or not. In fact, by some estimates, North Korea has intentionally overbuild the HS-15 so that future variants might be able to carry multiple independently targetable reentry vehicles (MIRV).

“The excess range and the giant nosecone make me think that this is overbuilt. Perhaps they're thinking ahead to multiple warheads,” Joshua H. Pollack, editor of the Nonproliferation Review and a senior research associate at the James Martin Center for Nonproliferation Studies, told the National Interest.

“It appears they are using two engines in tandem on the first stage, which is why the diameter of the missile is so big. They're probably the same engine used in the first stage of the HS-12 and -14, which would help to explain why everything worked as intended the first time out. It's not entirely new technology to them. What's more, this type of engine was originally designed (in Russia in the 1960s) to work in tandem. The second stage is an open question, for now. We'll see what the modelers conclude.”

Other than the massive size of the HS-15—which appears to be comparable in size to the Soviet SS-19 Stiletto or SS-24 Scalpel—there are some visible technological advancements.

“The single biggest technological change I see in the missile is the absence of verniers (separate, small steering engines). It looks like they have gimbaled engines now,” Pollack said.

“That's a significant advance. I wouldn't rule out the involvement of foreign specialists there. We already know they've collaborated with Iran on some missile projects. Not that Iran has ever shown off this particular technology...”

Vipin Narang, an associate professor of political science at the Massachusetts Institute of Technology told The National Interest, that while it is too early to say if North Korea had foreign assistance to develop the HS-15, it is unlikely.

“Too early to tell on foreign assistance, but I wouldn’t bet on it,” Narang said. “Foreign provenance on the engine design? Maybe. The RD family is Soviet origin, and this is likely derived from the RD family of engines. It’s certainly different and higher thrust than what they put on the HS-14, and that alone is scary. But all indications are that the North Koreans have modified them and can likely produce them themselves. If they couldn’t, would you waste them on tests?”

The launch vehicle might have been developed with Chinese help however—or at least modified from Chinese supplied equipment.

“The chassis looks familiar - it's a nine-axle version of the eight-axle chassis the Chinese supplied earlier. The NKs may have managed to modify one of the six or so chassis they have on hand,” Pollack said. “(The cab has been altered, too.) I doubt they have really learned to build these from scratch - they've been putting far too much effort into building big trucks instead for this purpose. If they've already got better technology, why bother doing that?”