Does Obama Care What Iran Wants in Iraq? 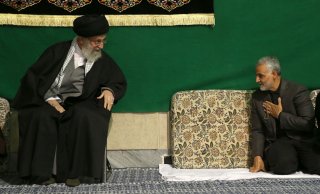 Marina Shalabi and Ian Duff, two researchers at the Washington Institute for Near East Policy, have done some interesting spadework on the history of how the U.S. Director of National Intelligence’s annual Worldwide Threat Assessment represents Iran and its proxies. While assessments from 2013 and earlier “[call] out Iran’s hegemonic goals” and explicitly identify Iran as a sponsor of terrorism, the last two “shifted away from Tehran's efforts to expand its regional hegemony and toward describing Iran as a protector of oppressed Shiites that seeks to reduce sectarian violence.” Shalabi and Duff offer a number of examples of this shift—consider this quote from the 2013 report:

In its efforts to spread influence abroad and undermine the United States and our allies, Iran is trying to exploit the fighting and unrest in the Arab world...Iran's efforts to secure regional hegemony, however, have achieved limited results, and the fall of the Asad regime in Syria would be a major strategic loss for Tehran.

Tehran, which strives for a stable Shia-led, pro-Iran government in Baghdad, is concerned about the deteriorating security situation in Iraq. Tehran is probably struggling to find the balance between protecting Shia equities in Iraq and avoiding overt actions that would precipitate greater anti-Shia violence.

The current assessments aren’t particularly sanguine about the impact of Iran’s efforts—consider this, also from 2014:

We assess that Iran's perceived responsibility to protect and empower Shia communities will increasingly trump its desire to avoid sectarian violence. Hence, Iran's actions will likely do more to fuel rather than dampen increasing sectarianism.

The current reports have an important strength: they offer a subtler and more detailed account of what Iranian leaders intend to do in the short and medium term. That’s useful for American decisionmakers. What’s really missing is a long-term account of Iranian goals, their consequences for U.S. interests in the region, and a grand strategic U.S. policy approach that takes all that into account. The latter point is outside the responsibility of the Director of National Intelligence, but the broader Obama administration must answer on all three. Where does Iran see itself in ten years? In twenty, in thirty? Does it want to be a kind of regional empire, and if so, what does that entail? Are its neighbors strong enough to prevent that? Are we? If Iranian influence grows, will some of its current rivals be forced to take a more accommodating position toward Tehran, or will they rise up in confrontation? How does all this interlock with the danger of nuclear proliferation? Can Iran be a partner in stability? Is it an implacable foe? Answers to bigger questions like these need to be the main drivers of our approach to the region, even though near-term crises like the Islamic State group and the collapse of the Iraqi army will necessarily dominate day-to-day policy.

A nearsighted approach can keep the administration from getting nailed in press conferences, but it won’t necessarily lead to the best long-term outcomes. These are momentous days in Iraq—the changes happening at the ground levels of the Iraqi regime will likely reshape its approach for a very long time, with implications for America’s role in the region. We don’t have much evidence that long-term dynamics are impacting the administration’s thinking. They might not be in Tehran, either, which can certainly be read as acting as much from desperation as from aspiration. But the consequence of this mutual muddling through has so far been an increase in Iran’s influence over what’s left of Iraq, and it’s not clear that Team Obama has a vision of what sustained impact this may have on U.S. interests.