Does the U.S. Navy Need Nukes in Asia? 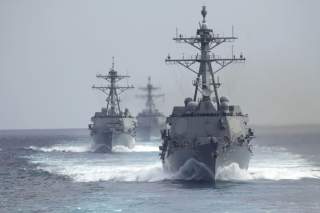 One of the advantages of modern technology is that it offers good access to distant conferences. Internet users already have access, for example, to a mixture of transcripts, audio files and videos from the Carnegie International Nuclear Policy Conference held in Washington in late March. The collection’s worth a browse for anyone interested in nuclear issues. But I’d like to concentrate today on just two of the panels: one on what allies want from extended assurance and a second on what they should expect from the same.

I think the first of those sessions was comparatively disappointing. The panel was composed of three ambassadors: an Australian, a South Korean and a German. Ambassadors are by nature centrists, skilled at blurring unpopular messages. And extended nuclear assurance is a tough topic. The overall result was an audience left with only a thin appreciation of what allies want. True, in just about every US ally nowadays there’s a spectrum of views about where nuclear weapons fit in the future of their alliance relationship. But even an unpacking of that spectrum and the associated political drivers animating its diverse components might have made for a more interesting panel.

I also think the question of what allies want from extended nuclear assurance can be answered simply and directly. Allies want credible signals from Washington that the US’ willingness to run nuclear risks on their behalf remains strong during a transformational strategic environment. Their anxieties on that question are quickened by the pace of transformation, a growing ambivalence in US declaratory policy, and the multi-decade shrinkage in the US theatre- and tactical-range nuclear arsenal.

The second panel, composed of three non-ambassadors, was more engaging. In one particularly thoughtful burst on the Asian environment, Brad Glosserman (of the Pacific Forum CSIS) outlined a set of things that he believed allies shouldn’t expect. That list included ‘details’ about US deterrence arrangements, forward-deployed US nuclear weapons, a comprehensive US strategic doctrine for Asia, clarity in the US-China relationship, and an end to political dysfunction in Washington.

I’m not sure there’s much demand here in Australia for greater details about US nuclear-weapon systems and arrangements. Nor do I think the final three points on the list are particular expectations in Canberra. Yes, a more comprehensive US strategic doctrine for Asia would be nice but, as Brad points out earlier in his presentation, the rebalance already offers a US leaning forward in Asia. But there is, I think, both in Canberra and in other allied capitals, an interest in strengthening the credibility of US extended nuclear assurance. Credibility turns on clear signals of commitment. And commitment might well include a greater level of forward deployment.

That’s where I part company with Brad. So far, the reach-back model of US theatre- and tactical-range nuclear weapons in Asia turns solely upon air-delivered munitions flown into the theatre during crises. There aren’t land-based nuclear weapons already situated on the territories of America’s Asian allies. And the US Navy hasn’t carried non-strategic nuclear weapons since the early 1990s. It’s that absence of naval-based weapons that concerns me. The Asia–Pacific’s still, for most American allies, primarily a maritime theatre. If the US Navy isn’t going to be a contributor to extended nuclear assurance, that’s going to leave a substantial gap in the fabric.

Nuclear weapons deployed on naval vessels—and, no, I’m not just talking about strategic ballistic missiles deployed on submarines—would offer a variety of gains. They would increase US nuclear presence in the region, while minimizing the possibility of terrorist seizure of the weapons. They would allow the same set of weapons to play a strategic role across a set of different bilateral alliances in the Asia–Pacific. Mobile platforms help offset the theatre’s vast size. And naval basing allows the US to exploit its naval strength in a maritime strategic environment.

It’s been clear for some time that the US Navy’s not a fan of nuclear weapons. At the tactical level, it’s long been believed that it has significant advantages in relation to a conventional conflict—in acoustics, for example—that would be lost in any crossing of the nuclear threshold. But if the Asian strategic environment continues to darken, reintroducing nuclear weapons onto naval vessels might be the easiest way to strengthen US extended nuclear assurance in Asia. Maybe the environment doesn’t require a full return of numbers and types of naval nuclear weapons deployed during the Cold War. Still, crossing off the list of possible US actions in the Asia–Pacific even a small increase in such weapons seems too hasty.