Is Donald Trump Getting Ready to Attack North Korea? 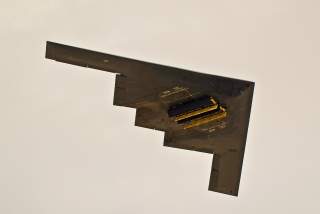 “I want your listeners to know that by the end of this week there’s gonna be some strong signals to China and North Korea that the military option is very viable,” Senator Lindsey Graham told Tony Perkins on his radio show Wednesday.

The South Carolina Republican, who in recent months has conveyed President Trump’s most chilling threats to the Kim regime, did not specify what he had in mind, but he did lay down a marker. As Graham told Perkins, “Now, nobody wants a war with North Korea, thousands, maybe millions, could get hurt or get killed but the president has to pick between our homeland security and regional stability and he has told me, he has told the Chinese, that he’s not going to live under the threat of a nuclear attack from North Korea and if he has to use military force he will and if there’s going to be a war it’s going to be in China’s backyard.”

Senator Graham did not specify what those “strong signals” would be. So what did he mean?

Perhaps he was thinking of oil.

At about the same time of the Graham interview, Nikki Haley, the U.S. ambassador to the U.N., delivered her own threat to use force. “China must show leadership and follow through,” she said at an emergency session of the Security Council. “China can do this on its own, or we can take the oil situation into our own hands.”

In substance, Graham said the same thing, albeit with less stark words. During the Perkins interview, he revealed what he thought was the last stop before a military strike. “Here’s the only option that I can see that would possibly work, is if China basically cut off the energy that North Korea needs to survive or threaten to do so,” the senator told the president of the Family Research Council.

Will America attack the Friendship Pipeline running between China and North Korea or hit the North’s only operating refinery?

The Trump administration has—or is trying to give the impression that it has—run out of patience with sanctions. Since this spring, American leaders, officials, and diplomats have been persuading, cajoling, and forcing their counterparts around the world to cut off the flow of funds to the Kimist state. As a result of the “maximum pressure” campaign, countries are sending home North Korean workers, closing North Korean diplomatic missions, and shutting down North Korean businesses.

Recently, there have been signs of financial stress in the Democratic People’s Republic of Korea. There are reports, for instance, that some officials, members of the regime’s favored class, are not getting rations from their “special distribution channel.” Kim is now requiring an acceleration in “loyalty payments,” indicating cash flow problems. Secretary of State Rex Tillerson, speaking in public last week, talked about shortages of fuel. There are even rumors that North Korean police are rounding up homeless children and shipping them off to labor camps so they can turn out products for sale.

At the moment, Haley looks like she is laying the groundwork for more Security Council sanctions on North Korea, which would be the tenth set since 2006, but the reality is that the Trump administration does not need new rules to starve the Kim regime. The president’s September 21 executive order, by itself, can frustrate Pyongyang’s dangerous ambitions.

Executive Order 13810 basically says that anyone doing business with North Korea cannot do business with the United States, thereby forcing countries like China to choose between the two.

Beijing apparently does not think the Trump White House is serious about enforcement of 13810. From all indications, Chinese companies are still doing brisk business with the North. For example, two-way trade between the two states was up 3.7% in the first three calendar quarters of this year according to Beijing and appears to be continuing at more or less the same pace now. It is possible, therefore, that the American threats to use force—from Graham, Haley, and others—are merely an attempt to intimidate Chinese officials to end commercial ties with the Kim regime.

Whatever the case, the threats to strike the North must be feeding Pyongyang’s already heightened sense of paranoia and are definitely contributing to the mood of dread and helplessness in Seoul. At the same time, the war talk is creating an air of triumphalism in Washington.

In the American capital, most everyone assumes the United States can attack North Korea without major consequence to the homeland. “If there’s going to be a war to stop him, it will be over there,” Graham, referring to Kim Jong Un, told NBC’s Today show in August. “If thousands die, they’re going to die over there. They’re not going to die here.” President Trump, the senator said, “told me that to my face.”

An American first strike on North Korea may not result in a limited conflict, however. On August 10, Global Times, a Beijing tabloid controlled by the authoritative People’s Daily, laid out what appears to be China’s official position on its treaty obligations to Pyongyang.

“China should also make clear that if North Korea launches missiles that threaten U.S. soil first and the U.S. retaliates, China will stay neutral,” the paper declared in an editorial titled “Reckless Game Over the Korean Peninsula Runs Risk of Real War.” “If the U.S. and South Korea carry out strikes and try to overthrow the North Korean regime and change the political pattern of the Korean peninsula, China will prevent them from doing so.”

In short, an American strike on North Korea can trigger history’s next great conflict, so the senator is too confident predicting there will be no casualties in the American homeland.

Graham brings Douglas MacArthur to mind. The general, as his troops pushed North Korean forces up the peninsula in the Korean War, confidently told President Truman in October 1950 that the Chinese would not come to the aid of the North’s Kim Il Sung. The Chinese in fact did intervene, the following month. Seven decades later, Beijing may surprise Washington again by rescuing Kim’s grandson.