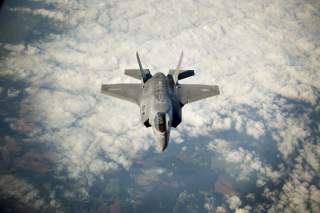 President-elect Donald Trump has weighed in on Lockheed Martin’s tri-service F-35 Joint Strike Fighter program—promising that billions will be saved after he is formally inaugurated early next year. Trump did not say he would outright cancel the stealthy new single-engine fighter, but his language suggests that the nearly $400 billion program could—at a minimum—be severely truncated.

“The F-35 program and cost is out of control. Billions of dollars can and will be saved on military (and other) purchases after January 20th,” President-elect Trump said in a Tweet early on Dec. 12.

Nor is this the first time Trump has called out the F-35 program. Earlier on Sunday, the future president denounced the stealth fighter and the people managing the effort. “Look at the F-35 program with the money, the hundreds of billions of dollars,” Trump said during a Fox News interview on Sunday. “It’s out of control. And the people that are making these deals for the government, they should never be allowed to go to work for these companies. You know, they make a deal like that and two or three years later, you see them working for these companies that made the deal. They should have a lifetime restriction.”

Indeed, the F-35 program has faced cost growth and delays since the system development and  demonstration contract was awarded to Lockheed Martin in 2001. The initial operational capability (IOC) date for the U.S. Marines slipped from 2010 to 2015 while the Air Force and Navy IOC dates slipped to 2016 and 2018 respectively from the original target of 2012. And in the case of both the Air Force and Marine Corps—those services opted for a limited IOC using an interim Block 2B/3i configuration that only offers very limited combat capability to get the jet into operation as soon as possible. “These new dates represented a delay of 5 to 6 years from the program’s initial baseline dates,” reads an April 2016 Government Accountability Office (GAO) report.

Meanwhile, F-35 costs have soared from initial estimates. While the F-35 program was initially estimated to cost $233 billion in 2001, by 2015 the price tag stood at $379 billion. Moreover, according to the GAO, program acquisition unit costs jumped from $81 million per aircraft in 2001 to $154.3 million in 2015. A decision on moving to full rate production has slipped to 2019. “While F-35 program cost, quantity, and schedule estimates increased significantly between the initial program baseline in 2001 and latest baseline in 2012, they have remained relatively stable over the past 3 years,” GAO report states.

But developing the F-35 is just one piece of the puzzle, according another GAO report—which uses Pentagon data—it will cost another $891 billion to sustain the F-35 through its life-cycle. “The F-35 program office develops an annual estimate for the O&S costs of maintaining and supporting the F-35 for 56 years,” reads the GAO report. “In its most recent estimate (2014), the program office estimates that it will cost about $891 billion to sustain the entire F-35 fleet over its life cycle.”

In the meantime, the F-35 has come under fire from the Pentagon’s operational testing office. Dr. Michael Gilmore, the Pentagon’s director of operational test and evaluation, has decried the Pentagon’s often misleading statements about the F-35. “If not changed, the existing responses would at best be considered misleading and at worst, prevarications,” Gilmore wrote in an internal memo criticizing the draft response to questions about F-35 testing from Senate Armed Services Committee Chairman John McCain according to Bloomberg. Paul Francis— managing director of acquisition and sourcing management, Government Accountability Office—made similar statements during a Senate Armed Services Committee hearing earlier in December.

Lockheed Martin and the Joint Strike Fighter program office had not issued statement by press time. However, it is not clear what alternative there is to the F-35 program at this stage. The F-35 is the only stealthy tactical fighter that remains in production since the last Lockheed Martin F-22 Raptor rolled off the production line in 2012. The Navy has option of building more Boeing F/A-18E/F Super Hornets in the short term, while the Marines have no practical alternative.