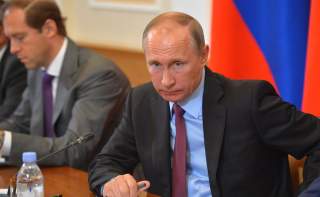 Current hostility and distrust in U.S.-Russia relations hardly make it an opportune time to re-examine the bilateral relationship, yet this abhorrent state of affairs is precisely what necessitates a new strategy on the part of the next president. Strategic stability, long taken for granted, is disintegrating, while the net sum of military interactions with Russia is on a trajectory towards crisis. The next administration must understand that absent a course correction, the coming years in our relations will be driven by an entirely negative agenda, largely set by Moscow, to the detriment of U.S. interests and the security of our allies.

The first priority should be to arrest the deteriorating relationship, reestablish military contacts with the aim of ceasing provocative behavior, curbing tit-for-tat shows of force, crude messaging and unnecessary risk taking. Early steps in good faith can be made through a modicum of cooperation in Syria, a conflict where Russia already holds most of the cards, and may ultimately contribute to the U.S. campaign against Islamic State. Russia can prove instrumental, or a spoiler, to U.S. interests on North Korea, Afghanistan, Iran and perhaps even China depending on the policies the next president chooses to pursue. However, we must accept that compartmentalization in our relationship with Russia is impossible without resolving the two destabilizing issues in the relationship: Ukraine and sanctions. The United States cannot expect to confront Russia on its core interests, while seeking cooperation elsewhere on its own.

Absent trust, which may take decades to return, any arrangement with Russia will ultimately collapse under the weight of those unresolved policy contradictions. Sanctions are not only toxic but have proven a bridge to nowhere, preserving transatlantic unity but having no coercive effect on Russia. A catastrophic success, in the form of Russian economic collapse, is also hardly in the U.S. interest. The simmering conflict in Ukraine is both cause and symptom of Russia's current rebellion against the international order that underpins the U.S. role in the international system. The United States cannot hope to maintain its position at the top of a rules-based world order, and sustain an expanding network of allies, with an overt challenge unchecked in Europe, and thinly veiled expansionism by a much stronger power in the Asia-Pacific region.

The next president must lay out a vision that returns Russia to the international system, restores stability to European security, and finds a framework of interaction with Moscow that contributes to U.S. policy interests elsewhere. To be sustainable, this must be achieved without sacrificing our fundamental values, for example, recognizing the forced annexation of Crimea. Any new approach will come under attack by unforeseen events, and may fall victim to sabotage from within by a resistant policy establishment, which has typically lurched from judging Russia to be irrelevant or an insatiable strategic adversary. Reversing course will be the product of incremental, but deliberate steps, rather than attempts at a grand bargain. This begins by wrangling the policy elite at home, offering an olive branch to the Kremlin to test the art of the possible, while at the same time demonstrating the resolve to see through a prolonged confrontation and deter aggression against allies.

Michael Kofman is a Global Fellow at the Kennan Institute, Wilson Center, and an analyst at CNA Corporation.