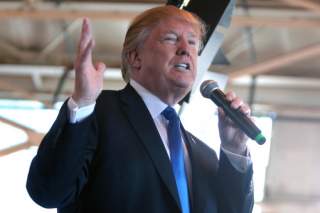 In my previous post (for the Lowy Interpreter) I labeled the front-runner for the Republican presidential nomination, Donald Trump, a 'Nixon-Kissinger realist'. Since then, Trump has provided a detailed account of his worldview in an interview with David Sanger and Maggie Haberman from the New York Times.

It affirms my previous description and here I expand on what I mean.

Nixon became president in the shadow of Vietnam; the 'domino theory' had been discredited, the anti-war movement was gathering momentum, and the costs of becoming embroiled in wars that did not affect core American interests was keenly felt. In 1969, Nixon delivered a speech in Guam, and during the Q&A summarized what became known as 'the Nixon Doctrine':

I want to be sure that our policies in the future, all over the world, in Asia, Latin America, Africa, and the rest, reduce American involvement. One of assistance, yes, assistance in helping them solve their own problems, but not going in and just doing the job ourselves simply because that is the easier way to do it.

This sent shockwaves through America's allies. Here in Australia, Nixon's speech, combined with Britain's retreat from east of the Suez, forced a maturation in strategic thinking and led to the development of 'self-reliance' as an Australian defense concept.

To many, 'the Nixon Doctrine' meant a return to pre-World War II isolationism. And just as with Trump, this is inaccurate. In fact, the notion of a so-called 'isolationist streak' in contemporary American culture is somewhat fallacious. Rather, since the end of World War II the U.S. has oscillated between 'interventionism' and 'realism'. At times of national greatness (such as the end of the Cold War) Americans become idealistic and are keen to export their exceptionalism to the world. When severely bitten, such as in Vietnam and Iraq, America swings towards realism, where realpolitik approaches to great-power relations prevail for a time.

Trump, and to a lesser extent Obama, is a reflection of this realist thinking. Trump isn't an isolationist, but as president he is more likely to set clear priorities and align American resources with a narrower grand strategy.

It is true that Trump's prescriptions depart, often radically, from long-standing US policy. And yet clarity about Trump's realist foundations enables us to interpret his foreign policy thinking without devolving into false notions that Trump is somehow incoherent.

In Part 1 of this series, I discuss Trump's views on NATO, and in Part 2 I'll apply the Nixon-Kissinger model to Trump's prescriptions for nuclear proliferation, alliances in East Asia and implications for Australia.

Trump says NATO is obsolete, and complains bitterly that America does all of the heavy lifting. The second part of that claim is no overstatement: European NATO countries approximate the US in economic size, and yet America bears 75% of the total cost.

Western European powers are easily able to protect themselves, and today's Europe is of peripheral national security interest to the U.S. Moreover, the continental land forces required to defend Europe are a total mismatch for the maritime theater of the Asia Pacific, where America's key challenges lie.

Trump understands this. In his book, Crippled America, Trump is clear that the rise of China is the single greatest challenge to America's place in the world; immediately in terms of trade, but in the future as a direct hegemonic challenge to American primacy. Trump knows that policy settings must change if the U.S. is to be competitive in this long-term strategic rivalry, and that burdening the American taxpayer with being 'the policeman of the world', including through its outsized NATO commitment, is not conducive to that effort.

The problem for Trump is that there are two NATOs, and this has to be considered with respect to what a post-NATO security apparatus might look like.

First there are the 'traditional' NATO allies of Western Europe who no longer worry about a Russian invasion and see NATO primarily as a 'security promoter'. For them NATO is about undertaking interventions abroad in places like Afghanistan and Libya. These countries can (and frankly should) do more for their own defense, and could meaningfully contribute to a re-invigorated security apparatus focused on counter-terrorism. The second NATO is made up of those who joined as part of the post-Cold War expansion. For these post-communist states, NATO membership is about collective defense and protection against Russia. If NATO dissolved then some (particularly the Baltic states of Lithuania, Latvia and Estonia) could ultimately lose their independence.

For interventionist school, dissolving the only military alliance of sufficient membership to confer international legitimacy on the use of armed force seems abhorrent. Yet for unsentimental realists like Nixon, Kissinger or Trump, this is merely responsiveness to national priorities in evolving global circumstances. The underlying pressures that guide Trump's prescriptions about NATO and America's global role are nothing more than taking the Obama Administration's 'rebalance' to the Asia Pacific to its logical conclusion.

Which brings me to Nixon and Kissinger's greatest success: going to China.

Exploiting the implacable hostility between China and the Soviet Union, the Nixon Administration famously made a deal with Mao and opened relations with Beijing. This diplomatic coup shifted the geostrategic balance in favor of the West and underpinned the long period of stability enjoyed by the region since. Accordingly, some prominent foreign policy experts erroneously believe Trump will repeat this by cutting a deal with President Xi that surrenders the South China Sea.

This is not likely. Back when Nixon was president, Europe was the epicentre of strategic importance for the U.S., with the Asia Pacific a relative distraction. Now the opposite is true. Therefore Trump won't 'go to China' – he'll go to Russia.

Imagine this hypothetical: Trump meets Putin and secretly agrees to dissolve NATO entirely. Instead, a new pan-European security architecture will be established focused on counter-terrorism – one that includes Russia as a member. In exchange, the territorial integrity of the Baltic States is categorically affirmed, Russia agrees not to further test European borders, and to instead 'pivot to Asia' itself with regard to its security posture.

Such a coup would ensure Trump was counted among the greatest foreign policy presidents. It would also do Nixon and Kissinger proud.