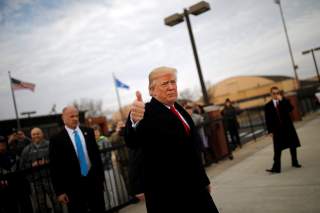 The June 2018 G-7 Summit at Charlevoix, Quebec, may go down as the place and time when Donald Trump, roughly five hundred days into his presidency, put his stamp on U.S. foreign policy, just prior to his encounter with North Korean leader Kim Jong-un in Singapore. As a secondary consequence, it may also serve as the death knell for the Group of seven, at least in its post–Cold War form.

For the past two years, ever since his surprise November 2016 election, the U.S. foreign-policy establishment has sought to convince its counterparts across the Atlantic that nothing would really change in the dynamics of the Euro-Atlantic community—a line first sounded by outgoing Vice President Joe Biden. Generally, there were two types of reassurances. The first piece of advice was to ignore what Trump says in his speeches, rallies, and tweets, because he either didn’t really mean it or would not be particularly interested in the nuts and bolts of national-security policy—and so his off-the-cuff remarks could be ignored. The second was to point to the presence of committed Atlanticists in staff choices and cabinet and subcabinet picks, to suggest that day-to-day policy would remain in the hands of trusted personnel, and that these appointees at the National Security Council, the State Department and the Pentagon would keep things on track. The release of the 2017 National Security Strategy was cited as proof of this process: that a few rhetorical bones were tossed to assuage the president’s preferences and worldview, but that the core remained a traditional Republican approach to world affairs. Sometimes, the language used—about the so-called “adults” in the room that would school and correct the chief executive—ran perilously close to the complaints made in these pages some years back by Richard Perle about the ways in which a president can be disconnected from the levers of power.

But by summer 2018, many of the staff and appointees who were supposed to keep things on track, keep the president contained, and whose presence was specifically cited by the U.S. Congressional delegation at the 2018 Munich Security Conference as proof that “all is well” are gone. Trump has refreshed his national-security team with those more inclined to support his “America First” orientation. And instead of “grownups” in the room to tell the president no, the new configuration of the national-security teams and economic teams believe that it is their job to facilitate the president’s preferences and intuition.

What we have seen in Quebec is the natural consequence of the “narrative collapse” in U.S. foreign policy, where the international status quo is, in the eyes of the president and his supporters, no longer providing concrete benefits to the United States. It may be, as Tom Nichols has suggested, that the support for the president’s economic nationalism in the United States is because others in government have been working to try and mitigate the consequences of spats with key trading partners. Many of the key “talking points” about why the United States needs to maintain the current global order do not appear to resonate with the president or his base. Steven Pifer, for instance, in assessing Trump’s performance at the G-7 Summit, worried that the alienation of allies meant that America would be alone in its endeavors. “If the United States ends up facing a future Afghanistan or Iraq situation, it may find no allies or partners prepared to help out,” he said. But to the base, this is a feature, not a bug—because the United States should not, in their view, get involved in such conflicts in the future.

Indeed, what we have seen in Quebec should not have been a surprise, given Trump’s remarks at Davos earlier this year—and that is the speech that other G-7 leaders should have paid much closer attention to, rather than relying on the reassurances that Trump could be guided. Trump is playing a game of chicken with the Europeans, the Canadians and the Japanese—that they will agree to make significant concessions in favor of his preferences in order not to risk bringing the entire system down. Kori Schake, deputy director of the International Institute for Strategic Studies, characterized Trump’s approach in comments to the BBC as that of the “wrecking ball.” Trump’s gamble is that the old G-7 edifice can be taken down and rebuilt according to his specifications—but he appears to be willing to take the chance that there might be some rubble strewn about the global system for a time.

In that light, I believe that his bombshell comments about inviting Vladimir Putin to return to the G-7 Summit need to be seen in light of this approach. Just as in Davos, Trump is daring other countries to follow through on whether they would prefer to deal with him, or with Chinese President Xi Jinping and with Putin. After all, just prior to the Quebec conclave, both French president Emmanuel Macron and Japanese prime minister Shinzo Abe graced Putin’s St. Petersburg Economic Forum—certainly not adhering to any shared Western commitment to isolate Putin for his misdeeds on the international stage—while German chancellor Angela Merkel (along with Indian prime minister Narendra Modi) had traveled to Putin’s “vacation capital” of Sochi for consultations. In all of these meetings, these leaders grumbled to Putin about Trump, his policies and his approaches, particularly when it came to the U.S. decision to withdraw from the Iran nuclear deal. Yet Trump’s approach seems to be that this talk will not turn into concrete action against the United States: that threats of balancing against him are more bark than bite. And if Macron, Merkel and Abe, not to mention the new Italian government, are talking about re-engaging Russia and balancing with Moscow against an unpredictable Donald Trump, then Trump, in turn, is trying to play his own Russia card.

All of this is risky. Between the G-7 conclave and the forthcoming summit with Kim Jong-un, Trump and his team are testing whether a series of games of chicken will work—causing other countries to back down and to renegotiate deals and institutions more to Trump’s liking. Perhaps he will be proven right—especially if the rest of the G-7 Summit agrees to review trade policies. On the other hand, this really could prove to be the prelude to a new phase in global order: where the U.S. leadership role is diminished, and we truly enter into a G-Zero world—in which all powers, including the United States, will have to take their chances.