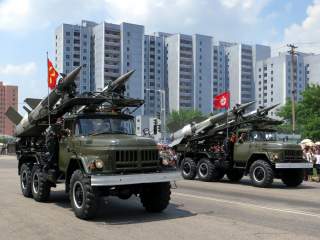 This piece is part of a special RCW series on the U.S.-China geopolitical relationship. The views expressed here are the author’s own.

A few years ago, while attending a track 2.0 dialogue on U.S.-China relations, I listened as a Chinese scholar made an observation that has always stuck with me. When it comes to North Korea, the scholar explained: “We [China] don’t like the status-quo, a North Korea that wants the most powerful weapons on the planet -- nuclear weapons -- who points them at our top trading partners in Asia and eventually America. But it could get much worse, as crazy as that sounds.”

People in the room were aghast. They relentlessly challenged the Chinese expert, who was also a retired official of the People’s Liberation Army, on what he meant. Scholars from around the globe pressed him for details. How could he say in good conscience that there could be anything worse than a North Korea armed with nuclear weapons?

Waiver he did not. He pressed his case, noting, “look at this problem from where I sit in Beijing. I see a world of trouble when it comes to North Korea. I see war. I see death. I see superpower showdowns. We must all agree we don’t want this. Yes, nuclear weapons are bad, but North Korea could create far more trouble than you realize, and China would have to deal with most of it.”

My colleague from Beijing was correct. While we hate the status quo on the Korean Peninsula, there are far worse outcomes, especially if the Trump administration pressures China to “solve” the North Korea issue and destabilize the regime in Pyongyang.

To demonstrate what we could be in for, let’s gaze for moment into our crystal ball. Suppose, for example, that China did begin to apply major pressure to what is often called the Hermit Kingdom. Beijing could cut by 25 percent all North Korean oil exports to get the North Koreans to abandon or at least negotiate over their nuclear and missile programs. North Korea might be able to survive the reduction for a time, but not forever. North Korean leader Kim Jong Un may eventually grow desperate as gas shortages begin to pop up all over the country, threatening the stability of his regime. Kim then decides that he must show he is still in control, and that his military might has not been affected. So he decides to not only test another nuclear weapon, the sixth such test of his atomic resolve, but at the same time he test-launches his very first inter-continental ballistic missile into the skies above the mid-Pacific Ocean. Kim chooses to be a little daring -- he selects a flight path that would see the missile crash 250 miles north of Hawaii into the ocean. But American missile defenses in Alaska are ready, easily shooting the missile out of the sky. How then might Kim respond?

Here is another scenario in which China does its best to “solve” the Korea crisis, only to see it backfire. Beijing decides to not only cut back fuel exports by 25 percent, but also slow food exports to Pyongyang for two weeks in what would amount to a temporary 20 percent slashing of North Korea’s food supply. Already short on food -- 40 percent of North Korea’s population is undernourished and depends on food rations -- chaos breaks out in six different major cities, with more than 400 people killed in food riots. In an army base near the Chinese border, a group of 700 rioting North Koreans storm the food pantries, killing 60 soldiers in the process and taking some of their weapons. Choppy cell phone video leaks out of the North, with the rioters screaming, “we won’t starve anymore,” a reference to mass famine in the 1990s that claimed the lives of possibly 2.5 million North Koreans.

From here, things get worse. Kim sends in his army to put down the riots. They are ordered to use all means necessary, including VX gas, to end the chaos. But Kim’s generals are nervous to give the deployment orders -- seeing an opportunity to end this regime once and for all and attempt market-style reforms like their allies in Beijing. Instead, in the middle of the night, hours before troops are to leave their barracks and attack the rioters, Kim’s top generals attempt a coup. They send 200 special operations soldiers into a bunker Kim is staying in for protection against America if it were to attack. The mission, at least it appears at the time, is a success, with reports that Kim Jong Un is dead. However, Kim outsmarted his generals, and through electronic bugs and intercepts he knew they were coming -- they kill a decoy instead. Kim, now safe in a remote location, appears on state TV and names the so-called traitors and orders them executed. But the military is evenly split between those who are loyal to Kim, and those who are loyal to the mutinous generals. A civil war seems imminent, with both sides armed with weapons of mass destruction that could see the death of millions and drag in not only South Korea, but also China, the United States, and potentially Japan.

Now, a little disclaimer: The above scenarios I have heard  outlined on several occasions from academics and retired military officials in China over the years. And while they may seem too far-fetched, they only scratch the surface of what could happen if the North Korean regime were accidently pushed over the abyss. It doesn’t take a Tom Clancy novel to understand why many past U.S. administrations have not poked Kim too hard: North Korea might just be the ultimate Pandora’s box. Open the lid too far, and you just never know what will come out.

Harry J. Kazianis (@grecianformula) is director of defense studies at the Center for the National Interest. Kazianis also presently serves as Executive Editor of the National Interest and fellow at both the Potomac Foundation and the Center for China Policy at the University of Nottingham (UK). He is the author of The Tao of A2/AD: China’s Rationale for the Creation of Anti-Access.

This originally appeared in RealClearWorld here.