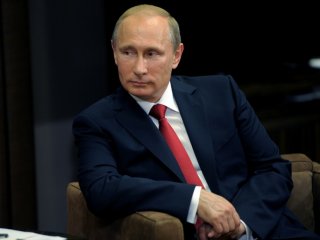 Given the currently tense and complex relationship between Russia and the United States, it seems like a daunting task indeed to chart the future trajectory of U.S.-Russian affairs. But that is precisely the task that the contributors to a comprehensive new report published by the Center for the National Interest that is titled The United States and Russia after the Ukraine Crisis: Three Scenarios undertook. The volume examines several possibilities—not predictions—for the course of U.S.-Russian relations in the next two to three years.

In an event at the Center marking the release of the report, Executive Director Paul J. Saunders, who also edited the report, served as moderator. Authors of the scenarios comprised the discussion panel, including Matthew Rojansky, Director of the Kennan Institute at the Woodrow Wilson Center for International Scholars, and Samuel Charap, Senior Fellow for Russia and Eurasia at the International Institute for Strategic Studies.

Charap, tasked with the challenge of outlining a best-case scenario in which the United States and Russia relax tensions enough to pursue a “functional relationship,” acknowledged that such an outcome is unlikely. It would depend on both stability, that is, managing disagreements on destabilizing issues, and compartmentalization, in which disagreements are still pursued with vigor, but the two countries are able to collaborate on mutual interests. The result, according to Charap, would be similar to the current relationship between the United States and China—adversarial, but cooperative on many issues.

Rojansky’s scenario envisions the Ukraine-Russia confrontation developing into a frozen conflict similar to Moldova-Transnistria, but on a much larger scale. Whereas much of Charap’s scenario was predicated on positive developments in Ukrainian domestic politics, Rojansky’s scenario assumes Ukrainian politics will be business as usual, with the spirit of Maidan still alive but the energy to effect change squelched by previous disappointments. Rojansky suggests that Russia will continue its “redefinition process,” riding the historical wave of Slavophilism in an attempt to distinguish itself from the West. U.S. politicians, in turn, will continue “Russia-bashing,” which Rojansky referred to as an “easy and cost-free” way to score political points. This would produce an enduring confrontation.

Nikolas Gvosdev, professor of national security studies at the U.S. Naval War College and a contributing editor of The National Interest, authored another scenario in the volume. Though he was unable to be present at the event, Paul Saunders briefly outlined Gvosdev’s effort, which draws upon existing differences within Europe and between the United States and some European countries over policy toward Russia to illustrate the consequences of a breakdown in consensus. In this case, Western European “Ukraine fatigue” and a growing focus on more pressing crises, such as terrorism and Syrian refugees, may lead to a realization on the part of some nations that cooperation with Russia is necessary. Gvosdev’s scenario also suggests that an “erosion of unity” fed by far-right parties in Europe may swing the pendulum toward, rather than away from, Russia. EU members may realize that individual nations’ interests trump the EU’s collective interest, causing some of them to reconsider Russian sanctions.

Following the discussion of the report, the panelists elaborated on the current Russian political environment. Rojansky characterized the current Russian system as “inherently brittle,” resting on the whims of Putin and his associates, the oligarchs and political elites. He expressed concern about the “Russian nationalist fringe,” noting that Putin “seems to be obliged to give these people a platform.” Charap suggested that Putin will remain in power for some time, but warned that whoever succeeds him may not necessarily be any better, and policymakers need to keep this in mind.

Saunders concurred, stating that the system will be stable as long as the Russian people have faith in Putin. Without that assurance, much like the stock market, there may be a political “crash,” throwing the existing order into turmoil. Rojansky also noted the interesting state of Russia’s economy as compared to Putin’s rhetoric, stating that Putin is “giving liberal economic speeches. . . but there is rot at the top of the system.” Rojansky suggested that Putin is indeed interested in economic liberalization, but considering the lack of transparency, corporate governance, and functional institutions in the country, the task seems insurmountable. Charap agreed, stating that we are likely to continue to see an economic “hybrid model” which has existed since the 1990s, with the state playing a sizeable role in the Russian economy.

Charap noted that in his scenario, Russian economic motivations would be a factor in improving relations between Russia and the West. Rojansky said that U.S. sanctions on Russia are likely to continue, as “economic warfare” remains the most popular tool of the moment. It seems to be the method of choice because policymakers believe that it costs the United States nothing while still inflicting damage on the opponent. In Europe, however, the cost of sanctions is greater on both sides, and sanctions fatigue may set in, leading Europe, or at least parts of it, to consider lifting or loosening sanctions, much like in Gvosdev’s scenario of a divided Europe. When it comes to Russia, uncertainty, it seems, is the only certainty, and as Charap stated, responding to Russian behavior has so far been more important than any distinctions in policy between the United States and Europe.