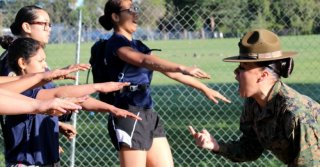 Not long ago, the Obama administration determined that women can enter all military combat occupations. Now the debate has quickly shifted to whether women can be forced into combat.

Suddenly, the exceptional qualifications and ambition of a few women seeking ground combat roles could have significant consequences for all women.

A proposal to “Draft America’s Daughters,” part of the National Defense Authorization Act, is headed for the House floor the week of May 16. The policy would require women between the ages of 18 and 26 to register for Selective Service, making them eligible to be called up—right along with young men—if Congress were to reinstate the draft.

Congress should act now to prohibit forcing women into combat, including through requiring them to register for Selective Service. Congress should also revisit the Obama administration’s decision to open all combat roles to women without exception, which increases pressure to include women in the draft. The rush to advance these policies ignores the military’s own research on the issue and leaves a number of critical questions unresolved.

In 2013, then-Secretary of Defense Leon Panetta directed the military services to conduct reviews with the goal of integrating women into all combat occupations by January 2016. Service chiefs had until September 2015 to request exceptions.

Women’s increased risk of injury in combat-related tasks (especially load-bearing tasks that depend considerably on physiology) makes them more vulnerable when engaging the enemy. “Combat is not an equal opportunity for women because they don’t have an equal opportunity to survive,” says Jude Eden, who served in the Marine Corps but opposes opening combat roles to women. Women on the front lines would be especially at risk if captured by the enemy (consider the Islamic State’s brutalization of female prisoners in recent months).

The moral framework guiding Western policy for the use of force requires strategic choices to minimize casualties in combat. It is one thing for women to be drawn into combat incidentally or to be attached to a combat unit for a discrete functional mission. But it’s quite another to plan to send women into frontline ground combat knowing, as Eden says, “they don’t have an equal opportunity to survive.”

The Marines’ evaluation of the combat effectiveness of mixed units led the commandant of the Marine Corps to recommend in September 2015 that some ground combat roles continue to be limited to men. That request was rebuffed, however, and Secretary of Defense Ash Carter declared in December that all military occupations, without exception, would be open to women as of Jan. 1, 2016.

Brushing past such military concerns was in step with a comment made by Joint Chiefs Chairman Gen. Martin Dempsey at the outset of the review period. As he told military commanders back in 2013, if a woman could not meet their units’ standards, they would have to justify why the standards need to be that high. Meanwhile, in May 2015, Navy Secretary Ray Mabus directed that one in four enlisted recruits in the Navy and Marine Corps should be women.

These instances raise questions about whether social goals have taken precedence over military objectives in the march to put women in combat. Moreover, the momentum to open all options for the few extraordinary women seeking to serve in ground combat is now propelling us toward a requirement that could affect all women.

Congress should prohibit forcing women into combat and should take a longer look at the blanket policy of women in all combat roles, prioritizing military effectiveness as it does so. Equality does not mean disregarding differences that are relevant to accomplishing the mission—especially when that mission is life or death.

Women in the armed forces have courageously served our nation with distinction, including during wartime. It does not do justice to the valor and sacrifice they have made in many different roles to suggest that women’s equality cannot be achieved without sending women into ground combat.

Women in Combat: May or Must?

While other arguments against including women in a draft can be made, some members of Congress and two federal court challenges already are seeking to exploit the opening of all combat roles to women to get a different result.

The combat exclusion was a significant factor in a 1981 Supreme Court case on registering women for Selective Service.

In Rostker v. Goldberg, the Supreme Court deferred to Congress, citing the combat distinction. “Since women are excluded from combat, Congress concluded that they would not be needed in the event of a draft, and therefore decided not to register them,” Justice William Rehnquist wrote for the majority. “Congress was certainly entitled, in the exercise of its constitutional powers to raise and regulate armies and navies, to focus on the question of military need rather than ‘equity.’”

If the draft were reinstated in a future conflict and women were included, what would the consequences be for combat effectiveness, for individual women sent into frontline ground combat, for the men alongside them, or for families and society at large?

With such looming questions unanswered, Congress should prohibit forcing women into combat, including through Selective Service registration. And, since many voices are already citing the fact that women can serve in all combat posts to argue that women must register for the draft, Congress should also revisit the blanket policy of women in combat.