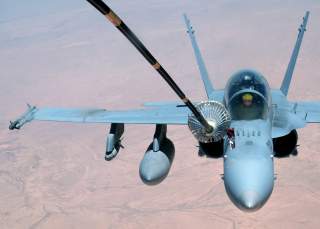 The last U.S. air-to-air kill was in 1999 during American participation in NATO Operation Allied Force over Yugoslavia when Lt. Col. Michael H. Geczy downed a Soviet-era MIG-29 with an F-16CJ.

The shoot-down comes during a period of heightened tensions between the U.S., Iran, Russia and the Syrian regime. The U.S. also engaged a suspected Iranian drone June 8 in the first at the time U.S. engagement of an aircraft since February 2009. Both recent U.S. air-to-air engagements come after attempts by the Syrian regime and its proxies to attack U.S. backed anti-ISIS fighters.

The U.S. relies on the Syrian Democratic Forces (SDF) to reclaim territory from ISIS. The Syrian regime and its allies have began increasingly targeting the SDF, who control valuable territory inside Syria. The U.S. anti-ISIS mission noted that it repeatedly warned pro-Syrian regime forces over the now cut deconfliction channel.

After this failed, the Pentagon said that a “Syrian regime SU-22 dropped bombs near SDF fighters south of Tabqah and, in accordance with rules of engagement and in collective self-defense of Coalition partnered forces, was immediately shot down by a U.S. F/A-18E Super Hornet.”

Russia was so incensed by the Sunday shoot-down that it threatened U.S. aircraft in the western half of Syria, saying that “any aircraft, including planes and drones of the international coalition, detected in the operation areas west of the Euphrates River by the Russian air forces will be followed by Russian ground-based air defense and air defense aircraft as air targets.”