Egypt: The "Coup Was Actually Liberal..." 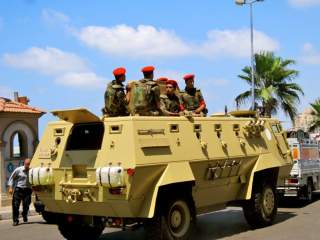 Over the last few years, Egypt has become an object lesson in how narrow interests, greed, and politics can quickly undo noble ideas and aspirations. The time since former President Hosni Mubarak’s departure has been a period of political cynicism, unprecedented violence, and economic dislocation. Yet for all the troubles bearing down on Egyptians, there are many who believe that the country’s trajectory is positive. This is not just elites grateful that the military intervention of July 2013 has restored the old—in their minds, natural—political order, but widespread optimism. Treat the polling with caution, but they demonstrate an overwhelming amount of support for President Abdel Fattah al-Sisi. Friends in Cairo insist that “as much as 80 percent of the population” supports the new program and believe that Egypt’s new leader has set the country on a proper course. If that is the case, then why do Egyptians seem so furious?

Among the most angry is that group of people invariably described in Western accounts as “secular, liberal, and politically active.” There is no doubt that there are those who seem to benefit in some way (financial? political?) from their ostentatious anger while others have become deranged in their fury. For example, Tarek Heggy—a self-styled intellectual who once sought speaking engagements at Washington think tanks, universities, libraries, and other places that helped cultivate his image as a man of letters—recently wrote: “They [Americans] are ruthless and brutal criminals that [sic] deserve a 9th September, 2001 [sic] EVERY SINGLE DAY [caps original].” Heggy is, of course, one end of an extreme and few people ever took him seriously to begin with. There are also Egyptians who are anti-Muslim Brotherhood and anti-coup. Still, in between those people and Heggy, there is a significant number of Egyptians who were eloquent and tenacious advocates for progressive political change during the Mubarak era, but have now become among the most ardent defenders of the July 3 coup, supporters of the new old order under President Sisi, and enthusiasts for dismantling the Muslim Brotherhood, official excesses and all. How did this happen?

Let’s acknowledge that Western analysts—including this one—have been less interested in understanding why people might be anti-Mubarak but pro-Sisi than in dismissing them as faux liberals. We have all come to believe in the alleged axiom of Egyptian politics: Faced with a choice between democratically elected Islamists and the authoritarianism of the military, the liberals will choose the officers, revealing themselves to be not so liberal after all. That seems self-evident, but liberal supporters of the post-July 2013 political process argue that the coup and their support for it were actually quintessentially liberal. To them, the military’s intervention precluded Egypt’s slide into a new authoritarianism of a particular religious bent from which there could be no hope for the survival of liberalism. These folks also make the case that their (mostly Western) critics mistakenly fuse liberal principles and democracy, failing to recognize that democracy can bring about both its own demise as well as that of liberalism. Moreover, the first concern of many of those Egyptian intellectuals who opposed Mubarak but support Sisi is preserving and advancing liberal ideals, which is more important—for now—than the ballot box. It’s an interesting and informed argument, steeped as it is in John Locke. Yet the argument seems like a leap of faith. It is hard to imagine that as Egypt’s authorities go about re-engineering the political institutions of the state to ensure that something like the January 25 uprising never happens again that they are simultaneously creating an environment where liberalism can not only be sustained, but also thrive.

The “coup was actually liberal” line of reasoning is an intellectualization of something else I have heard from numerous contacts. Some months ago, I was Skyping with an Egyptian friend when we stumbled into a discussion of the contradictions of the pro-Sisi liberals. I asked her how one could be an eloquent defender of human rights for herself and others like her, but not for those who happen to have a different view of the world. In an honest, but also enigmatic moment, she declared, “Steven, you have no idea what the year under Morsi did to us. It affected us deeply.” I pressed her, but she could not fully articulate what she meant. Of course she was furious over Morsi’s arrogance, authoritarianism, and incompetence as well as the post-coup violence, which she blamed squarely on the Brotherhood. All of this was perfectly understandable, but there was clearly more going on inside her head that she was not ready to explain.

During the summer of 2013, Egyptians argued that the conflict going on within their society was over Egypt’s identity. Liberals and others claim that in supporting the coup they were protecting Egypt’s polyglot, tolerant, outward looking, and cosmopolitan culture (it does not matter that these things are not necessarily true, just that the people believe they were defending these alleged attributes). What seems lost in all the fury directed at the Brotherhood at the time and ever since is the very fact that the Brothers were crucial actors in forging Egypt’s identity over the better part of the last century. The Brothers were not the only influential voices in Egypt, of course. Liberals, nationalists, Copts, and Nasserists shaped Egypt, but there was also an undoubtedly important role for the Brothers. They were critical in framing the way in which many Egyptians thought about everything from religion, culture, and education to the way Egypt related to the region and the world. When Mubarak fell, the Brothers offered a vision of society that, if the parliamentary elections of 2011 and 2012 are any indication, resonated deeply with many Egyptians. This is not to excuse the authoritarianism of the Brotherhood and Morsi’s disastrous year in office, but whether pro-Sisi liberals like it or even know it, the Brotherhood has had a profound impact on the way many Egyptians interpret their reality.

It may very well be that people are rejecting what the Brothers have been offering them in the last 86 years, but no one should deny the significance of the Brotherhood in forging Egyptian identity in the twentieth century. The way in which the regime and its supporters have essentially declared that the Brothers are not authentically Egyptian is a politically motivated misconception and misinterpretation of modern Egypt. Yet what remains to be explained is how a group of people who loathed Mubarak and hated Morsi have come to revere Sisi whose record demonstrates as little respect for democracy and liberalism as his predecessors. I remain respectfully stumped.

This piece first appeared in CFR’s From the Potomac to the Euphrates blog here.