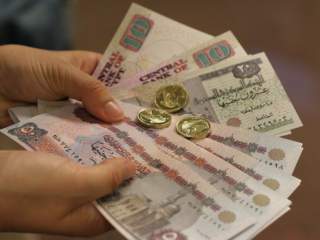 Just as I was heading out the door yesterday, I received a message from my friend Timothy Kaldas with just two words: “They caved.” I knew exactly what he was referring to. The Central Bank of Egypt determined that it could no longer defend the Egyptian pound and devalued the currency a whopping 13 percent. You can now exchange a U.S. dollar at a bank in Cairo for about nine pounds, which is great for tourists, if there were any. It is about time Egyptian banking officials took this step, which immediately injected some confidence in the financial markets and among investors. It may seem beside the point to ask why it took them so long, but the answer to that question might tell observers something about what to expect next from Egypt’s economic policymakers.

The value of the pound has been on a long slow slide since protests against former President Hosni Mubarak began on January 25, 2011. That day the exchange rate was just under six pounds to the dollar; eighteen days later it was about the same. When the Muslim Brotherhood’s Mohammed Morsi took the oath of office on June 30, 2012, you could get about six pounds to the dollar, and when he was ousted a year later the exchange rate was seven to one. And, as noted, it is now in the range of nine pounds for every U.S. dollar. That is in the neighborhood of a 30 percent slide in the value of the pound. The depreciation might have gone further and faster had it not been for the efforts of the Central Bank to defend the currency. This means that Egypt’s banking authorities spent a lot of hard currency buying Egyptians pounds in an effort to maintain the currency’s value.

It was not a good idea; the Egyptians were literally throwing good money after bad because the pound was overvalued to start with. The end result was both a depreciation and a significant hit to Egypt’s foreign currency reserves. Before Egypt’s top central banker, Tarek Amer (the nephew of Gamal Abdel Nasser’s destructive buddy Field Marshal Abdel Hakim Amer, who was responsible for Egypt’s multiple military disgraces in the 1960s and much more), “caved,” it was near impossible to get dollars at an Egyptian bank, though you could get them on the street in the thriving black market where the dollar was fetching a little more than nine pounds. The Central Bank’s move wiped out the black market premium.

It is hard to understand how the Egyptians got themselves into this mess. Tim wrote about Egypt’s inevitable devaluation so it is not like people did not know that this was coming. The problem was—as it always is—politics. Egypt’s bankers and economic decision-makers are, for the most part, no slouches. They no doubt understood the inevitability of a devaluation, but they put off the pain for as long as they could. Even as they worked to maintain the currency’s value, the pound’s depreciation over the last five years has made everything more expensive for Egyptians. Prices have not increased uniformly, but they are up across the board—in many cases quite sharply.

The uprising against Mubarak and the massive 2013 protest against Morsi that culminated in the July 3, 2013, coup d’état were not solely about pocketbook issues, but economic hardship—or the perception of it—was part of the phenomenon. Surely Egyptian officials are aware of the January 1977 bread riots that were set off when the government indicated it would reduce (but not eliminate) subsidies. The intensity of the protests forced President Anwar al-Sadat to back down and ask the military to restore order. It was precisely this experience that spooked Mubarak out of fully implementing International Monetary Fund reforms in the 1990s and why the president needed a lot of convincing to liberalize the exchange rate in early 2003. Proponents—including Amer’s friend and business associate Gamal Mubarak, the son of the former president—argued that it would make Egypt more attractive to foreign investors, spur privatization, increase competitiveness, and help expand economic opportunity. Mubarak and some of his old guard advisors feared inflation and bread riots without any of the promised socioeconomic benefits.

It is because of this recent history that Egypt’s current economic decision-makers delayed and delayed, hoping for a deus ex machina in the form of another cash infusion from Saudi Arabia and the United Arab Emirates. All the while, the gap between the black market and the official exchange rate grew, putting further pressure on Egypt’s foreign reserves. Without a devaluation, the Egyptians faced the prospect of a run on its currency and an actual liquidity crisis.

So now what? The markets cheered the Central Bank, but let’s see how folks react. Economists like the efficiencies that exchange rate liberalization produces, but politicians are thinking more in terms of how it will affect their ability to purchase political control. An overvalued pound is, in ways, like one massive subsidy, which is why a devaluation is politically risky. Things are likely to get tougher for average Egyptians in the short run. If they take additional hardship in stride and the central bankers manage to keep inflation in check, it will signal to officials that they can worry less about undertaking further economic reforms. If they don’t, the devaluation and other changes on the table will likely be a one-shot deal.

For all the disdain Egypt’s leaders have maintained for their own people, they have often subordinated economic rationale to political expediency. The problems come when the latter catches up with the former and the pain is so much worse than it had to be.

Steven A. Cook is the Eni Enrico Mattei Senior Fellow for Middle East and Africa Studies at the Council on Foreign Relations. Cook thanks his my colleague Rob Kahn for his assistance with this blog post.

This article first appeared in From the Potomac to the Euphrates.