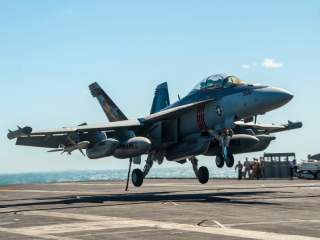 The United States will have to rebuild its capacity to counter Russia’s electronic warfare expertise in Europe. Electronic warfare—like much of America’s conventional warfighting capabilities—has been severely neglected during the twenty-five-year lull since the end of the Cold War. Moreover, for nearly fifteen years, the United States has been focused on counter-insurgency warfare in the Middle East rather than preparing for war against another great power.

But with a newly resurgent Russia once again threatening the peace in Europe, the United States will have to reinvest in electronic and cyber warfare to counter Moscow’s advancements in those fields. “For twenty years we’ve been making a partner out of Russia so our focus has not been on the capabilities that they have been developing,” U.S. Air Force Gen. Philip Breedlove, commander of U.S. European Command told the House Armed Services Committee on February 25. “Secondly, for all the right reasons, for the last thirteen or so years, our nation’s military has been focused on counterinsurgency operations—COIN—in Afghanistan and fighting Al Qaeda.”

Since neither the Taliban nor Al Qaeda has any meaningful electronic warfare capability, the United States had more or less allowed its capacity to fight in that arena atrophy. “While we have retained capability, we have not really practiced it to the veracity that we used to, nor have we retained the capacity that might be required to bust these growing A2/AD [anti-access/area denial] problems we see around the world,” Breedlove said. “We have electronic warfare capability—we probably do not have the capacity we need now.”

For example, America’s capabilities to suppress enemy air defenses are good, “but they’re not very dense,” Breedlove said. “We don’t have a lot of them,” he added.

The basic problem, however, is that Moscow has watched American warfighting capabilities since the first Persian Gulf War and has learned lessons from those wars. Russia—which retains a very robust defense industry—has invested heavily in countering American advantages. “Russia knows how we roll,” Breedlove said. “They have invested a lot in electronic warfare because they know we are a connected and precise force and they need to disconnect us to make us imprecise.”

While electronic warfare is one area where American capacity in Europe has atrophied, Breedlove said that the U.S. military in Europe needs more permanently stationed forces. One area that he highlighted was the North Atlantic where the Russian Navy massively increased its activity to nearly Cold War levels.

The U.S. Navy simply does not have enough submarines to counter Moscow’s resurgent undersea fleet. The problem will only get worse as the older Los Angeles-class attack submarines are retired without enough Virginia-class boats to replace them. “I do not get what I’ve asked for,” Breedlove said. “In that very contested, very highly sophisticated part of the world, we play zone defense, we can’t play man-to-man.”