EMP Detonation, Nuclear Blast or ICBM Test? What is North Korea's Next Move? 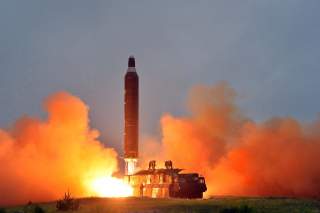 Donald Trump got a few laughs when he dubbed North Korean leader Kim Jong-un “little rocket man” after the lyrics of Elton John’s hit 1970s song. But as the US president knows, Kim’s fuse isn’t burning out. In fact, the buzz among top Korea analysts is that Pyongyang is lighting the way for at least one more long-range missile test.

The aim would be to show the US, beyond a shadow of a doubt, that the regime has mastered the intricacies of nuclear warhead miniaturization, re-entry and range. But some analysts warn that a misreading by Washington of such a test could trigger war.

Fueling speculation that a big demonstration may be due is the fact that North Korea hasn’t sent anything aloft for more than eight weeks – since its Hwasong-12 intermediate range ballistic missile launch on September 15 to be exact.

Ralph Cossa, president of the Pacific Forum at the Center for Strategic and International Studies (CSIS), told United Press International on Thursday that North Korea might undertake another missile test to convince the US that it can hit its furthest shores — not just the West Coast or Alaska.

Cossa’s assessment was supported a few days earlier by an analysis on 38 North by veteran Korea watcher Robert Carlin. Carlin argues that Pyongyang, euphoric over its two successful long-range missile launches in July, may think its strategic position vs. the US to now be unassailable. This might convince the regime to step back from the brink of nuclear war and settle for “practical equilibrium” with the US.

But before this can happen, Carlin warned, North Korea might be tempted to take “one more fatal step” that triggers a military response from a US president who doesn’t grasp Pyongyang’s real intentions.

“Watching events in Washington, it would not be surprising if the North has concluded that the President is too weak and embattled to take decisive action in response,” the former State Department intelligence honcho wrote on the respected Johns Hopkins University platform devoted to North Korean affairs.

What might that “fatal step” be? Carlin doesn’t say, but he’s clearly talking about another nuke or missile test of unknown type and scale. The possibilities include anything from another Hwasong-14 long-range missile test to North Korea’s threatened atmospheric detonation of an H-bomb somewhere over the Pacific. Some analysts warn that Pyongyang might even consider testing an infrastructure-paralyzing electromagnetic pulse, or EMP, device.

Joe Brazda, a nonproliferation expert at the Middlebury Institute for International Studies at Monterey, has cited data showing that North Korea’s top-of-the-line Hwasong-14 ICBM can reach Chicago and possibly the East Coast. Proving once and for all that the rocket can hit New York or Washington would be the final icing on Kim’s uranium cake.

Trump, who seems confident that his strategy of hurling insults with a few dove feathers at Kim is working, might be dumbfounded by such a move and could opt for military action, according to Carlin.

Kim, for his part, has historical precedent on his side for conducting what might be described as the mother of all tests. Back in the 1960s, the Pentagon belittled China’s ability to develop a nuclear arsenal with an effective delivery capability. Beijing responded in 1966 by launching a test missile armed with a live nuclear warhead that successfully detonated in the Gobi Desert. This put to rest any doubts that China was a nuclear superpower.

Will exuberance over its nukes persuade Pyongyang to go a test too far? Hopefully not.

There’s another possibility: North Korea will conduct another test or two but stop just short of the red line that invites annihilation by the US. Its next exercises in missilery will also leave no doubt that it has the recipe for nuclear deterrence. Despite seemingly mad political theatrics, North Korea has proven over the years that it’s a rational state actor capable of shrewdly measured acts. Kim Jong-un, to paraphrase Elton John’s lyrics, plans to be around for a “long, long time.”

Doug Tsuruoka is Editor-at-Large of Asia Times where this first appeared.